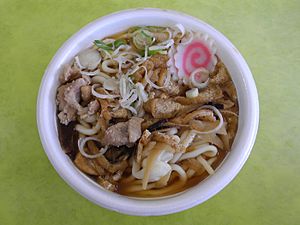 Udon (うどんcode: ja is deprecated ) is a type of thick, wheat-based noodle popular in Japanese cuisine.

Udon is most often served hot as a noodle soup in a mild, salty broth. Its simplest form is called kake udon. This consists only of dashi stock, soy sauce (shōyu), mirin, and udon noodles. Different things can be put on top of the soup as toppings. Often thinly cut scallions are used, along with other common toppings such as kamaboko, prawn or vegetable tempura, some spices, and wakame.

The flavor of the broth and toppings, as well as even noodle texture and thickness, is different from region to region. Usually, dark brown broth made from dark soy sauce (koikuchi shōyu) is common in eastern Japan. Light brown broth made from light soy sauce (usukuchi shōyu) is common in western Japan. However, many other regional types exist outside of just broth color and mainly vary in toppings used.

Kagawa Prefecture is famous for using udon as a staple food.

According to JAS (Japanese Agricultural Standard), to be udon, a round noodle's diameter has to be over 1.7 mm and a flat noodle's width over 1.7 mm. Udon dough is made from wheat flour and salt.

All content from Kiddle encyclopedia articles (including the article images and facts) can be freely used under Attribution-ShareAlike license, unless stated otherwise. Cite this article:
Udon Facts for Kids. Kiddle Encyclopedia.