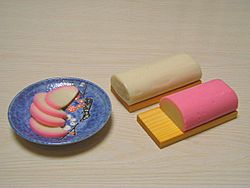 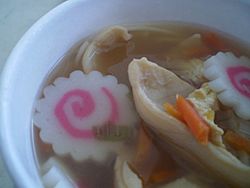 Kamaboko (蒲鉾code: ja is deprecated ), also known as surimi' is a cured, processed seafood product of Japan. It is made of puréed white fish, formed into different shapes including semi-cylinder loafs, and steamed until it becomes firm. Some kamaboko known as narutomaki is made with a swirl pattern in the center of each slice, named after the famous tidal whirlpool in the Japanese city Naruto. Outside of Japan, kamaboko is often referred to as fish cake.

Kamaboko has been made in Japan since the 14th century CE and has become commonly available in many other countries. One example that can be found in the West is kanikama (also known as kani kamaboko), or imitation crab. This variation of surimi is quite common in the West as it is a cheap substitute for real crab meat.

In Japan, kamaboko can often be seen served as a topping over ramen or udon. It is also commonly sold at convenience stores as chikama (kamaboko and cheese).

All content from Kiddle encyclopedia articles (including the article images and facts) can be freely used under Attribution-ShareAlike license, unless stated otherwise. Cite this article:
Kamaboko Facts for Kids. Kiddle Encyclopedia.