Ramen is a Japanese kind of noodle soup. The noodles are made of wheat. Ramen are typically Japanese, though they originally came from China. Ramen has become very popular in Japan and there are many shops that sell it. Japanese also make "instant ramen" to eat ramen quickly and easily at home. Outside Japan, people have also started to eat ramen.

On the model of Spaghetti Western, there are even movies based on Ramen.

There are various types of thickness, shapes and lengths. The noodle may be thin or thick, straight or wrinkled.

Ramen is a Japanese adaptation of Chinese wheat noodles. One theory says that ramen was first introduced to Japan during the 1660s by the Chinese neo-Confucian scholar Zhu Shunsui who served as an advisor to Tokugawa Mitsukuni after he became a refugee in Japan to escape Manchu rule and Mitsukuni became the first Japanese person to eat ramen, although most historians reject this theory as a myth created by the Japanese to embellish the origins of ramen. The more plausible theory is that ramen was introduced by Chinese immigrants in the late 19th or early 20th century at Yokohama Chinatown. According to the record of the Yokohama Ramen Museum, ramen originated in China and made its way over to Japan in 1859. Early versions were wheat noodles in broth topped with Chinese-style roast pork.

By 1900, restaurants serving Chinese cuisine from Canton and Shanghai offered a simple ramen dish of noodles (cut rather than hand-pulled), a few toppings, and a broth flavored with salt and pork bones. Many Chinese living in Japan also pulled portable food stalls, selling ramen and gyōza dumplings to workers. By the mid-1900s, these stalls used a type of a musical horn called a charumera (チャルメラ, from the Portuguese charamela) to advertise their presence, a practice some vendors still retain via a loudspeaker and a looped recording. By the early Shōwa period, ramen had become a popular dish when eating out.

According to ramen expert Hiroshi Osaki, the first specialized ramen shop opened in Yokohama in 1910.

After Japan's defeat in World War II, the American military occupied the country from 1945 to 1952. In December 1945, Japan recorded its worst rice harvest in 42 years, which caused food shortages as Japan had drastically reduced rice production during the war as production shifted to colonies in China and Taiwan. The US flooded the market with cheap wheat flour to deal with food shortages. From 1948 to 1951, bread consumption in Japan increased from 262,121 tons to 611,784 tons, but wheat also found its way into ramen, which most Japanese ate at black market food vendors to survive as the government food distribution system ran about 20 days behind schedule. Although the Americans maintained Japan's wartime ban on outdoor food vending, flour was secretly diverted from commercial mills into the black markets, where nearly 90 percent of stalls were under the control of gangsters locally referred to as yakuza who extorted vendors for protection money. Thousands of ramen vendors were arrested during the occupation. In the same period, millions of Japanese troops returned from China and continental East Asia from their posts in the Second Sino-Japanese War. Some of them would have been familiar with wheat noodles. By 1950 wheat flour exchange controls were removed and restrictions on food vending loosened, which further boosted the number of ramen vendors: private companies even rented out yatai starter kits consisting of noodles, toppings, bowls, and chopsticks. Ramen yatai provided a rare opportunity for small scale postwar entrepreneurship. The Americans also aggressively advertised the nutritional benefits of wheat and animal protein. The combination of these factors caused wheat noodles to gain prominence in Japan's rice-based culture. Gradually, ramen became associated with urban life.

In 1958, instant noodles were invented by Momofuku Ando, the Taiwanese-Japanese founder and chairman of Nissin Foods. Named the greatest Japanese invention of the 20th century in a Japanese poll, instant ramen allowed anyone to make an approximation of this dish simply by adding boiling water.

Beginning in the 1980s, ramen became a Japanese cultural icon and was studied around the world from many perspectives. At the same time, local varieties of ramen were hitting the national market and could even be ordered by their regional names. A ramen museum opened in Yokohama in 1994.

Today ramen is arguably one of Japan's most popular foods, with Tokyo alone containing around 5,000 ramen shops, and more than 24,000 ramen shops across Japan. Tsuta, a ramen restaurant in Tokyo’s Sugamo district, received a Michelin star in December 2015.

A wide variety of ramen exists in Japan, with geographical and vendor-specific differences even in varieties that share the same name. Ramen can be broadly categorized by its two main ingredients: noodles and broth. 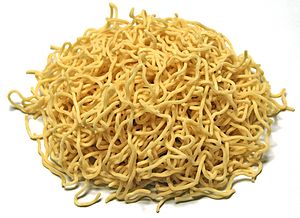 Most noodles are made from four basic ingredients: wheat flour, salt, water, and kansui (かん水code: ja is deprecated ) (from kansui (鹹水code: ja is deprecated , salt water)) a type of alkaline mineral water, containing sodium carbonate and usually potassium carbonate, as well as sometimes a small amount of phosphoric acid. Although Ramen noodles and Udon noodles are both made with wheat, they are different kinds of noodle.

The kansui is the distinguishing ingredient in ramen noodles, and originated in Inner Mongolia, where some lakes contained large amounts of these minerals and whose water is said to be perfect for making these noodles. Making noodles with kansui lends them a yellowish hue as well as a firm texture. Eggs may also be substituted for kansui. Some noodles are made with neither eggs nor kansui and should only be used for yakisoba, as they have a weaker structure and are more prone to soaking up moisture and becoming extremely soft when served in soup.

Ramen comes in various shapes and lengths. It may be thick, thin, or even ribbon-like, as well as straight or wrinkled.

Traditionally Ramen noodles were made manually, but with growing popularity many Ramen restaurants prefer to have in-house capacity to produce fresh noodles to meet the increased demand and improve quality. Automatic Ramen making machines imitating manual production methods have been available since the mid. 20th century produced by such Japanese manufacturers as Yamato MFG. and others. 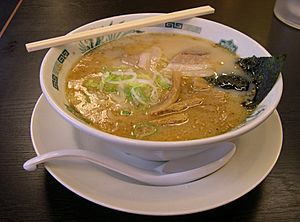 Ramen soup is generally made from stock based on chicken or pork, combined with a variety of ingredients such as kombu (kelp), katsuobushi (skipjack tuna flakes), niboshi (dried baby sardines), beef bones, pork bones, shiitake, and onions. Some modern Ramen broths can also be vegetable based. 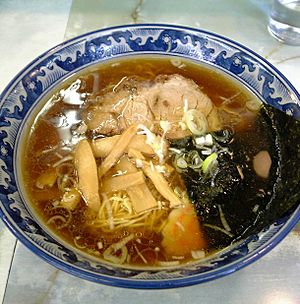 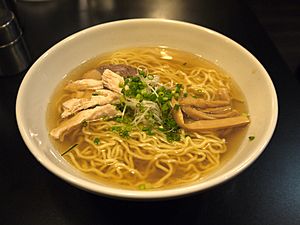 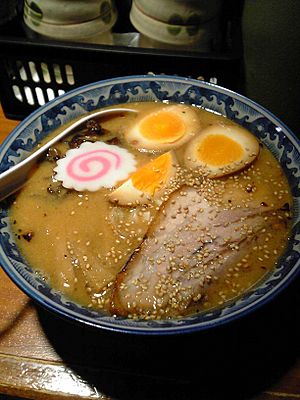 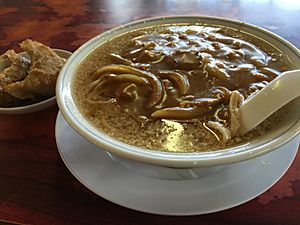 The resulting combination is generally divided into four categories. (although new and original variations often make this categorization less clear-cut) Described from old ones.

After basic preparation, ramen can be seasoned and flavored with any number of toppings, including but not limited to:

All content from Kiddle encyclopedia articles (including the article images and facts) can be freely used under Attribution-ShareAlike license, unless stated otherwise. Cite this article:
Ramen Facts for Kids. Kiddle Encyclopedia.