Pork cuts used for char siu can vary, but a few main cuts are common: 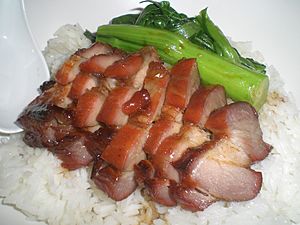 A plate of char siu rice

Char siu literally means "fork roasted" (siu being burn/roast and cha being fork, both noun and verb) after the traditional cooking method for the dish: long strips of seasoned boneless pork are skewered with long forks and placed in a covered oven or over a fire.

In ancient times, wild boar and other available meats were used to make char siu. However, in modern times, the meat is typically a shoulder cut of domestic pork, seasoned with a mixture of honey, five-spice powder, red fermented bean curd, dark soy sauce, hoisin sauce, red food colouring (not a traditional ingredient but very common in today's preparations and is optional), and sherry or rice wine (optional). These seasonings turn the exterior layer of the meat dark red, similar to the "smoke ring" of American barbecues. Maltose may be used to give char siu its characteristic shiny glaze.

Char siu is typically consumed with a starch, whether inside a bun (chasiu baau, 叉燒包), with noodles (chasiu min, 叉燒麵), or with rice (chasiu faan, 叉燒飯) in fast food establishments, or served alone as a centerpiece or main dish in traditional family dining establishments. If it is purchased outside of a restaurant, it is usually taken home and used as one ingredient in various complex entrees consumed at family meals.

In Hong Kong, char siu is usually purchased from a siu mei establishment, which specialises in meat dishes—char siu, soy sauce chicken, white cut chicken, roasted goose, roasted pork, etc. These shops usually display the merchandise by hanging them in the window. As a result, char siu is often consumed alongside one of these other meat dishes, as an independent lunch item on a per-person basis in a "rice box" meal. More commonly, it is purchased whole or sliced and wrapped and taken home to be used in family meals either by itself or cooked into one of many vegetable or meat dishes which use it as an ingredient. 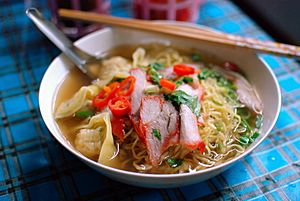 Char siu is often served in a noodle soup as here in Chiang Mai, Thailand

In Malaysia, Singapore, Indonesia, Cambodia, Thailand, and Vietnam char siew rice is found in many Chinese shāolà (烧腊) stalls along with roast duck and roast pork. The dish consists of slices of char siu, cucumbers, white rice and is drenched in sweet gravy or drizzled with dark soy sauce. Char siu rice is also a popular food within the Chinese community in Medan, Indonesia, where it is more called char sio. Char siew rice can also be found in Hainanese chicken rice stalls, where customers have a choice of having their char siu rice served with plain white rice or chicken-flavoured rice, and choose from garlic, chilli and soy sauces. Char siu is called mu daeng (Thai: หมูแดง "red pork") in Thailand and sach chrouk sa seev (Khmer: សាច់ជ្រូកសាសីុវ, sac cruuk sa səyv) in Cambodia.

In the Philippines, it is known as Chinese asado and usually eaten with cold cuts or served stuffed in siopao. In Flanders and Holland it is sometimes mistaken for the Chinese/Indonesian name 'babi pangang'. This is a different dish (mostly sweeter and served with yellow pickled Chinese cabbage, called Atjar). In fact these Chinese/Indo restaurants serve Cha(r) Sieuw under the original name. These restaurants in the Netherlands derived from Chinese immigrants and are made to adapt to the Dutch palate.

Vegetarian char siu also exists, usually made from wheat gluten. It can be found in vegetarian restaurants and stalls in South East Asian Chinese communities. 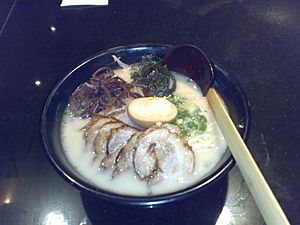 Japanese culture has adapted 叉燒 as chāshū (チャーシュー). Unlike its Chinese variant, it is prepared by rolling the meat into a log and then braising it at a low temperature. The Japanese adaptation is typically seasoned with soy sauce, sake, mirin and sugar or other sweetener, without the red food colouring, or five-spice powder. It is a typical ingredient for toppings in rāmen.

As a means of exceptional flavor and preparation, char siu applications extend beyond pork. In Hawaii, various meats are cooked char siu style. The term char siu refers to meats which have been marinated in char siu seasoning prepared either from scratch or from store-bought char siu seasoning packages, then roasted in an oven or over a fire. Ingredients in marinades for cha siu are similar to those found in China (honey, five-spice, wine, soy, hoisin, etc.), except that red food colouring is often used in place of the red bean curd for convenience. Char siu is used to marinate and prepare a variety of meats which can either be cooked in a conventional or convection oven (often not requiring the use of a fork or cha(zi) as traditional Chinese ovens do), on a standard barbecue, or even in an underground Hawaiian imu. In Hawaii, char siu chicken is as common as char siu pork, and various wild birds, mountain goat, and wild boar are also often cooked char siu style, as are many sausages and skewers.

All content from Kiddle encyclopedia articles (including the article images and facts) can be freely used under Attribution-ShareAlike license, unless stated otherwise. Cite this article:
Char siu Facts for Kids. Kiddle Encyclopedia.