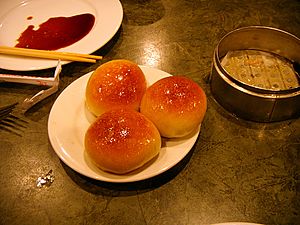 Encased in the center of the bun is tender, sweet, slow-roasted pork tenderloin. This cha siu is diced, and then mixed into a syrupy mixture of oyster sauce, hoisin sauce, roasted sesame seed oil, rice vinegar, shaoxing wine or dry sherry, soy sauce, sugar, and cornstarch.

In Hawaii, the item is called manapua. Its name is a shortening of the Hawaiian mea ʻono puaʻa, meaning "delicious pork thing". On the US mainland, the Chinese term is commonly used. The Chinese immigrants brought this dim sum item with them when they were brought over as plantation workers. In Samoa and American Samoa, the item is referred to as keke pua'a, literally meaning "pig cake".

This food usually consists of a white bun with a dark pink-colored diced pork filling. The Hawaiian version of the cha siu bao tends to be larger than its Chinese cousin and can be either steamed or baked. In Hawaii starting in the plantation era, manapua sellers were and still are a common occurrence and have even become iconic symbols of Hawaii. The red pork filling's dark pink color comes from marinating the pork with a very small amount of saltpeter prior to slow roasting. The bun is occasionally baked, but more frequently is steamed when it is made. Manapua has come to mean any meat-filled or bean-paste-filled bun made with the same dough as described above, including locally-created versions with hot dogs, curry chicken, kalua pig, and even ube (purple yam), which is a popular vegetarian version of the manapua. In Hawaii, freshly prepared or prepackaged frozen manapua may be found in dedicated bakeries, restaurants, and chain convenience stores.

In addition to existing in Hawaii, bao buns are also commonly found in Tahiti, French Polynesia. In Tahiti they are called chao pao, and were brought to the islands during the Chinese migration wave dating back to the mid 1800s. Despite its long Tahitian history, the chao pao retains all its authentic characteristics. The chao pao is a local favorite and is commonly sold all over the island in Chinese mom-and-pop stores as a breakfast item.

In Vietnam, the item is called xíu páo. It's originating from Guangdong and Chaozhou following a fairly large overseas Chinese community living in Hakka street in Nam Dinh, Vietnam. Ingredients for baking mainly include flour, meat, eggs, flour, lard and some typical spices depending on how each family's family is made. To make delicious cakes, people often marinate pork tenderloin with minced garlic, five flavors, oyster oil, honey and then baked until it turns the color of the cockroach and is fragrant. Char siu meat is cut with pomegranate seeds mixed with wood ear, pork fat and half a boiled chicken egg. The word "xíu páo" is considered to be transliterated Cantonese or Hokkien.

All content from Kiddle encyclopedia articles (including the article images and facts) can be freely used under Attribution-ShareAlike license, unless stated otherwise. Cite this article:
Cha siu bao Facts for Kids. Kiddle Encyclopedia.