Tahiti is the largest island of the Windward group of the Society Islands in French Polynesia, located in the central part of the Pacific Ocean. Divided into two parts, Tahiti Nui (bigger, northwestern part) and Tahiti Iti (smaller, southeastern part), the island was formed from volcanic activity; it is high and mountainous with surrounding coral reefs. Its population is 133,627 inhabitants (2020), making it the most populous island of French Polynesia and accounting for 68.7% of its total population.

Tahiti is the economic, cultural, and political centre of French Polynesia, an overseas collectivity (and the sole overseas country) of the French Republic. The capital of French Polynesia, Papeete, is located on the northwest coast of Tahiti. The only international airport in the region, Faa'a International Airport, is on Tahiti near Papeete. Tahiti was originally settled by Polynesians between 300 and 800 CE. They represent about 70% of the island's population, with the rest made up of Europeans, Chinese, and those of mixed heritage. The island was part of the Kingdom of Tahiti until its annexation by France in 1880, when it was proclaimed a colony of France, and the inhabitants became French citizens. French is the only official language, although the Tahitian language (Reo Tahiti) is widely spoken. 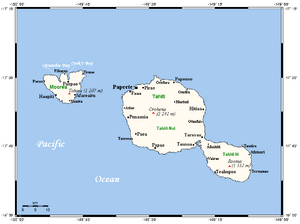 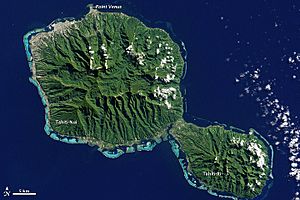 The interior of Tahiti Nui is almost entirely uninhabited. Tahiti Iti has remained isolated, as its southeastern half (Te Pari) is accessible only to those travelling by boat or on foot. The rest of the island is encircled by a main road which cuts between the mountains and the sea.

A scenic and winding interior road climbs past dairy farms and citrus groves with panoramic views. Tahiti's landscape features lush rainforests and many rivers and waterfalls, including the Papenoo River on the north side and the Fautaua Falls near Papeete. 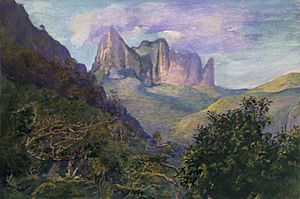 The Society archipelago is a hotspot volcanic chain consisting of ten islands and atolls. The chain is oriented along the N. 65° W. direction, parallel to the movement of the Pacific Plate. Due to the plate movement over the Society hotspot, the age of the islands decreases from 5 Ma at Maupiti to 0 Ma at Mehetia, where Mehetia is the inferred current location of the hotspot as evidenced by recent seismic activity. Maupiti, the oldest island in the chain, is a highly eroded shield volcano with at least 12 thin aa flows, which accumulated fairly rapidly between 4.79 and 4.05 Ma. Bora Bora is another highly eroded shield volcano consisting of basaltic lavas accumulated between 3.83 and 3.1 Ma. The lavas are intersected by post-shield dikes. Tahaa consists of shield-stage basalt with an age of 3.39 Ma, followed by additional eruptions 1.2 Ma later. Raiatea consists of shield-stage basalt followed by post-shield trachytic lava flows, all occurring from 2.75 to 2.29 Ma. Huahine consists of two coalesced basalt shield volcanoes, Huahine Nui and Huahine Iti, with several flows followed by post-shield trachyphonolitic lava domes from 3.08 to 2.06 Ma. Moorea consists of at least 16 flows of shield-stage basalt and post-shield lavas from 2.15 to 1.36 Ma. Tahiti consists of two basalt shield volcanoes, Tahiti Nui and Tahiti Iti, with an age range of 1.67 to 0.25 Ma.

November to April is the wet season, the wettest month of which is January with 340 millimetres (13 in) of rain in Papeete. August is the driest with 48 millimetres (1.9 in). 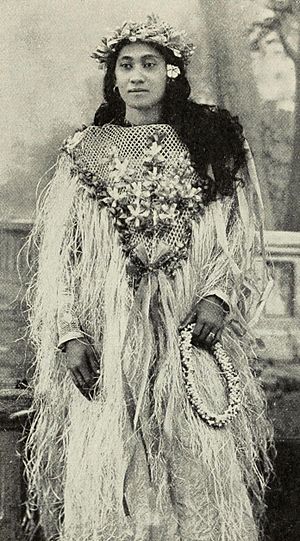 Tahitian cultures included an oral tradition that involved the mythology of gods, such as 'Oro and beliefs, as well as ancient traditions such as tattooing and navigation. The annual Heivā I Tahiti Festival in July is a celebration of traditional culture, dance, music and sports including a long distance race between the islands of French Polynesia, in modern outrigger canoes (va'a).

The Paul Gauguin Museum is dedicated to the life and works of French artist Paul Gauguin (1848–1903) who resided in Tahiti for years and painted such works as Two Tahitian Women, Tahitian Women on the Beach and Where Do We Come From? What Are We? Where Are We Going?

The Musée de Tahiti et des Îles (Museum of Tahiti and the Islands) is in Punaauia. It is an ethnographic museum that was founded in 1974 to conserve and restore Polynesian artefacts and cultural practices.

The Robert Wan Pearl Museum is the world's only museum dedicated to pearls. The Papeete Market sells local arts and crafts. 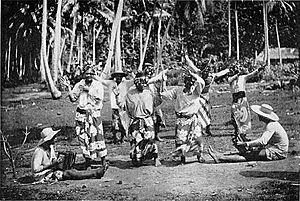 One of the most widely recognised images of the islands is the world-famous Tahitian dance. The 'ote'a (sometimes written as otea) is a traditional dance from Tahiti, where the dancers, standing in several rows, execute figures. This dance, easily recognised by its fast hip-shaking and grass skirts, is often confused with the Hawaiian hula, a generally slower more graceful dance which focuses more on the hands and storytelling than the hips.

The ʻōteʻa is one of the few dances which existed in pre-European times as a male dance. On the other hand, the hura (Tahitian vernacular for hula), a dance for women, has disappeared, and the couple's dance 'upa'upa is likewise gone but may have re-emerged as the tamure. Nowadays, the ʻōteʻa can be danced by men (ʻōteʻa tāne), by women (ʻōteʻa vahine), or by both genders (ʻōteʻa ʻāmui = united ʻō.). The dance is with music only, drums, but no singing. The drum can be one of the types of the tōʻere, a laying log of wood with a longitudinal slit, which is struck by one or two sticks. Or it can be the pahu, the ancient Tahitian standing drum covered with a shark skin and struck by the hands or with sticks. The rhythm from the tōʻere is fast, from the pahu it is slower. A smaller drum, the faʻatete, can be used.

The dancers make gestures, re-enacting daily occupations of life. For the men the themes can be chosen from warfare or sailing, and then they may use spears or paddles.

For women the themes are closer to home or from nature: combing their hair or the flight of a butterfly, for example. More elaborate themes can be chosen, for example, one where the dancers end up in a map of Tahiti, highlighting important places. In a proper ʻōteʻa the story of the theme should pervade the whole dance.

All content from Kiddle encyclopedia articles (including the article images and facts) can be freely used under Attribution-ShareAlike license, unless stated otherwise. Cite this article:
Tahiti Facts for Kids. Kiddle Encyclopedia.