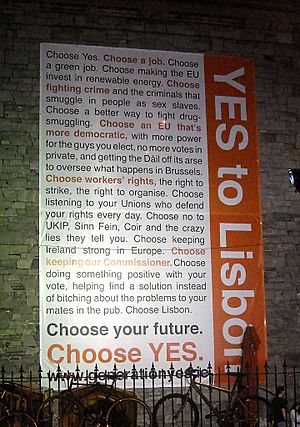 Ad to vote yes for the Treaty of Lisbon, by the Irish government, in 2009. 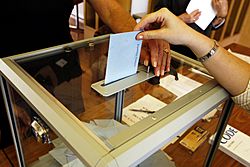 There are two types of result

It usually depends on the country's history and constitution what sort of referendum/plebiscite is used. In Switzerland a referendum is usually mandatory, because the people are seen as the source of the government's mandate (power) to govern.

In the United Kingdom referenda have only been advisory, because the government says that the people elected to Parliament make the decisions. The referendum on the independence of Scotland was an exception. It was legally binding, but it was not a referendum of the UK electorate. It was restricted to present residents of Scotland.

An example of a proposed plebiscite was the 2011 decision by Greek Prime Minister George Papandreou to let the Greek people vote on whether the heavily indebted nation would accept a €130 billion bailout package from the European Union. The idea shocked eurozone nations, as a "no" vote could mean Greece defaulting on its national debt, and leaving the European Union and the eurozone. However, the vote was cancelled.

Another example was the voting on the European Constitution in 2005. The vote took place in some countries. France and The Netherlands had a referendum on the subject. In both states, the voters said no to the proposal and no constitution was made.

Many political problems can be solved by asking the people their opinion because the supporters of the argument will be forced to accept the decision of the people. However:

- Philosophers Plato and Madison thought voters are too easily persuaded by their own internal feelings of a matter instead of focusing on the good of the nation. That is to say they vote selfishly.

All content from Kiddle encyclopedia articles (including the article images and facts) can be freely used under Attribution-ShareAlike license, unless stated otherwise. Cite this article:
Plebiscite Facts for Kids. Kiddle Encyclopedia.