Athens is the capital city of Greece. It is one of the most famous cities in the world. The city is named after Athena, a goddess in Greek mythology. Athens has a population of approximately 4 million people and is growing. It is in the prefecture, or division of the country, of Attica.

Athens was a powerful city in Classical times. It was known for the amount of learning that happened there. The city was home to Plato's Academy and Aristotle's Lyceum. It also had its own Constitution. Athens also created the world's first known democracy.

The city started to decline in 529, when the Emperor Justinian I closed its philosophical schools. The Parthenon was made a Christian church. That act saved it later from destruction of non Christian temples, in times of deep Theocracy.

The Ottoman Turks took control of Athens in 1458. The Turks made the Parthenon into a Muslim mosque. The Parthenon was later damaged in 1687 when gunpowder exploded inside it.

Athens was freed from the Turks during the Greek War of Independence (1821-1833). It was then made into the capital of Greece.

View of parts of central Athens and its eastern suburbs from Mount Lycabettus. 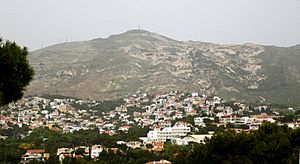 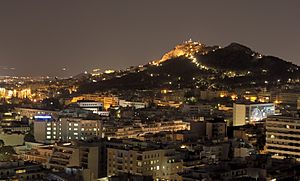 Athens sprawls across the central plain of Attica that is often referred to as the Athens or Attica Basin (Greek: Λεκανοπέδιο Αττικής). The basin is bounded by four large mountains: Mount Aigaleo to the west, Mount Parnitha to the north, Mount Pentelicus to the northeast and Mount Hymettus to the east. Beyond Mount Aegaleo lies the Thriasian plain, which forms an extension of the central plain to the west. The Saronic Gulf lies to the southwest. Mount Parnitha is the tallest of the four mountains (1,413 m (4,636 ft)), and has been declared a national park.

Athens is built around a number of hills. Lycabettus is one of the tallest hills of the city proper and provides a view of the entire Attica Basin. The geomorphology of Athens is deemed to be one of the most complex in the world because its mountains cause a temperature inversion phenomenon which, along with the Greek Government's difficulties controlling industrial pollution, was responsible for the air pollution problems the city has faced. This issue is not unique to Athens; for instance, Los Angeles and Mexico City also suffer from similar geomorphology inversion problems.

The Cephissus river, the Ilisos and the Eridanos stream are the historical rivers of Athens. 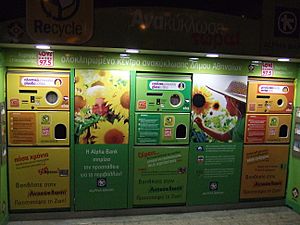 By the late 1970s, the pollution of Athens had become so destructive that according to the then Greek Minister of Culture, Constantine Trypanis, "...the carved details on the five the caryatids of the Erechtheum had seriously degenerated, while the face of the horseman on the Parthenon's west side was all but obliterated." A series of measures taken by the authorities of the city throughout the 1990s resulted in the improvement of air quality; the appearance of smog (or nefos as the Athenians used to call it) has become less common.

Measures taken by the Greek authorities throughout the 1990s have improved the quality of air over the Attica Basin. Nevertheless, air pollution still remains an issue for Athens, particularly during the hottest summer days. In late June 2007, the Attica region experienced a number of brush fires, including a blaze that burned a significant portion of a large forested national park in Mount Parnitha, considered critical to maintaining a better air quality in Athens all year round. Damage to the park has led to worries over a stalling in the improvement of air quality in the city.

The major waste management efforts undertaken in the last decade (particularly the plant built on the small island of Psytalia) have improved water quality in the Saronic Gulf, and the coastal waters of Athens are now accessible again to swimmers. In January 2007, Athens faced a waste management problem when its landfill near Ano Liosia, an Athenian suburb, reached capacity. The crisis eased by mid-January when authorities began taking the garbage to a temporary landfill.

Athens has a hot-summer Mediterranean climate (Köppen climate classification: Csa). The dominant feature of Athens' climate is alternation between prolonged hot and dry summers and mild winters with moderate rainfall. With an average of 416.8 millimetres (16.41 in) of yearly precipitation, rainfall occurs largely between the months of October and April. July and August are the driest months, where thunderstorms occur sparsely once or twice a month.

The annual precipitation of Athens is typically lower than in other parts of Greece, mainly in western Greece. As an example, Ioannina receives around 1,300 mm (51 in) per year, and Agrinio around 800 mm (31 in) per year. Daily average highs for July (1988–2017) have been measured at 34.4 °C (94 °F), but some parts of the city may be even warmer, in particular its western areas partly because of industrialization and partly because of a number of natural factors, knowledge of which has been available from the mid-19th century.

Athens holds the World Meteorological Organization record for the highest temperature ever recorded in Europe, at 48.0 °C (118.4 °F), which was recorded in the Elefsina and Tatoi suburbs of Athens on 10 July 1977. 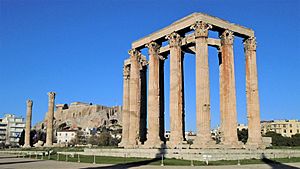 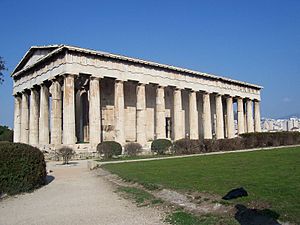 The Temple of Hephaestus is the best-preserved of all ancient Greek temples. 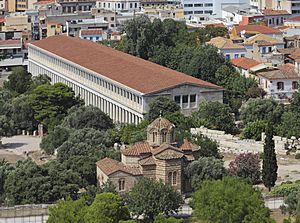 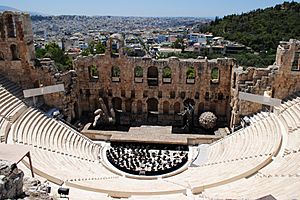 View of the Odeon of Herodes Atticus in 2012. Sets for Tosca performed by the Greek National Opera

Athens hosts 17 Foreign Archaeological Institutes which promote and facilitate research by scholars from their home countries. As a result, Athens has more than a dozen archaeological libraries and three specialized archaeological laboratories, and is the venue of several hundred specialized lectures, conferences and seminars, as well as dozens of archaeological exhibitions, each year. At any given time, hundreds of international scholars and researchers in all disciplines of archaeology are to be found in the city. 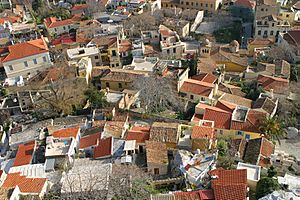 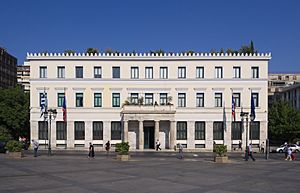 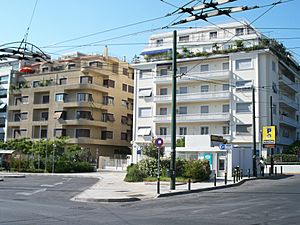 Two apartment buildings in central Athens. The left one is a modernist building of the 1930s, while the right one was built in the 1950s. 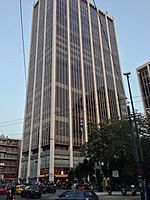 For the greatest part of the 19th century Neoclassicism dominated Athens, as well as some deviations from it such as Eclecticism, especially in the early 20th century. Thus, the Old Royal Palace was the first important public building to be built, between 1836 and 1843. Later in the mid and late 19th century, Theophil Freiherr von Hansen and Ernst Ziller took part in the construction of many neoclassical buildings such as the Athens Academy and the Zappeion Hall. Ziller also designed many private mansions in the centre of Athens which gradually became public, usually through donations, such as Schliemann's Iliou Melathron.

Beginning in the 1920s, Modern architecture including Bauhaus and Art Deco began to exert an influence on almost all Greek architects, and buildings both public and private were constructed in accordance with these styles. Localities with a great number of such buildings include Kolonaki, and some areas of the centre of the city; neighbourhoods developed in this period include Kypseli.

In the 1950s and 1960s during the extension and development of Athens, other modern movements such as the International style played an important role. The centre of Athens was largely rebuilt, leading to the demolition of a number of neoclassical buildings. The architects of this era employed materials such as glass, marble and aluminium, and many blended modern and classical elements. After World War II, internationally known architects to have designed and built in the city included Walter Gropius, with his design for the US Embassy, and, among others, Eero Saarinen, in his postwar design for the east terminal of the Ellinikon Airport.

All over the city can be found several statues or busts. Apart from the neoclassicals by Leonidas Drosis at the Academy of Athens (Plato, Socrates, Apollo, Athena), other notable include the statue of Theseus by Georgios Fytalis at Thiseion, of philhellenes like Lord Byron, George Canning and William Gladstone, the equestrian statue of Theodoros Kolokotronis by Lazaros Sochos in front of the Old Parliament, statues of Ioannis Kapodistrias, Rigas Feraios and Adamantios Korais at the University, of Evangelos Zappas and Konstantinos Zappas at Zappeion, of Ioannis Varvakis at the National Garden, the "woodbreaker" by Dimitrios Filippotis, the equestrian statue of Alexandros Papagos at Papagou district and various busts of fighters of Greek independence at the Pedion tou Areos. An important landmark is also the Tomb of the Unknown Soldier in Syntagma. 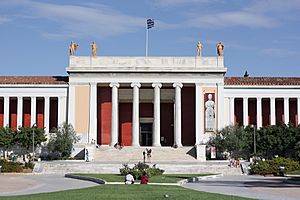 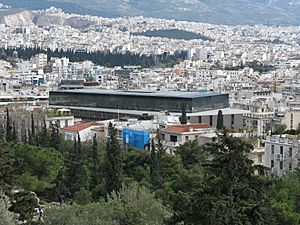 Athens' most important museums include:

Athens has been a destination for travellers since antiquity. Over the past decade, the city's infrastructure and social amenities have improved, in part because of its successful bid to stage the 2004 Olympic Games. The Greek Government, aided by the EU, has funded major infrastructure projects such as the state-of-the-art Eleftherios Venizelos International Airport, the expansion of the Athens Metro system, and the new Attiki Odos Motorway.

Athens was voted as the third best European city to visit in 2015 by European Best Destination. More than 240,000 people voted.

Athens has these sister cities:

All content from Kiddle encyclopedia articles (including the article images and facts) can be freely used under Attribution-ShareAlike license, unless stated otherwise. Cite this article:
Athens Facts for Kids. Kiddle Encyclopedia.