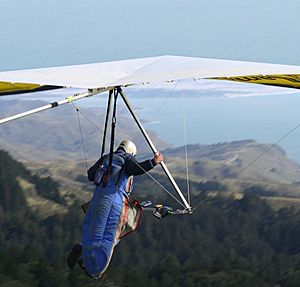 Hang gliding is an air sport in which a pilot flies a light and unmotorized foot-launchable aircraft called a hang glider (also known as Delta plane or Deltaplane).

Most modern hang gliders are made of an aluminium alloy or composite-framed fabric wing. The pilot is ensconced in a harness suspended from the airframe, and exercises control by shifting body weight in opposition to a control frame, but other devices, including modern aircraft flight control systems, may be used.

In the sport's early days, pilots were restricted to gliding down small hills on low-performance hang gliders. However, modern technology gives pilots the ability to soar for hours, gain thousands of metres of altitude in thermal updrafts, perform aerobatics, and glide cross-country for hundreds of kilometres.

Most early glider designs did not ensure safe flight; the problem was that early flight pioneers did not sufficiently understand the underlying principles that made a bird's wing work.

Starting in the 1880s technical and scientific advancements were made that led to the first truly practical gliders. Otto Lilienthal built (barely) controllable gliders in the 1890s, with which he could ridge soar. He rigorously documented his work, strongly influencing later designers; for this reason, Lilienthal is one of the best known and most influential early aviation pioneers. His aircraft was controlled by weight shift and is similar to a modern hang glider. (He was attached to the gliders by his shoulders, and swung his feet to control them.)

On November 23, 1948 Francis Rogallo and Gertrude Rogallo applied for a kite patent for a fully flexible kited wing with approved claims for its stiffenings and gliding uses; the flexible wing or Rogallo wing, which in 1957 the American space agency NASA began testing in various flexible and semi-rigid configurations in order to use it as a recovery system for the Gemini space capsules. The various stiffening formats and the wing's simplicity of design and ease of construction, along with its capability of slow flight and its gentle landing characteristics, did not go unnoticed by hang glider enthusiasts. In 1960-1962 Barry Hill Palmer adapted the flexible wing concept to make foot-launched hang gliders with four different control arrangements. In 1963 Mike Burns adapted the flexible wing to build a kite-hang glider he called Skiplane. In 1963, John W. Dickenson adapted the flexible wing airfoil concept to make another water-ski kite glider; for this, the Fédération Aéronautique Internationale vested Dickenson with the Hang Gliding Diploma (2006) for the invention of the modern hang glider. 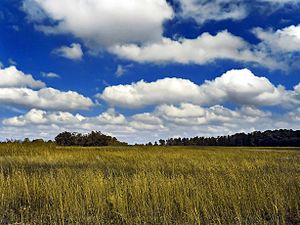 A glider is continuously descending through nearby air, yet glider pilots can stay airborne for hours by flying in areas of rising air. Once this skill has been mastered, pilots can glide long distances to fly cross-country (XC). Rising air masses derive from the following sources:

Thermals
The most commonly used source of lift is created by the sun's energy heating the ground which in turn heats the air above it. This warm air rises in columns known as thermals. Soaring pilots quickly become aware of land features which can generate thermals; and of visual indications of thermals such as soaring birds, cumulus clouds, cloud streets, dust devils, and haze domes. Also, nearly every glider contains an instrument known as a variometer (a very sensitive vertical speed indicator) which shows visually (and often audibly) the presence of lift and sink. Having located a thermal, a glider pilot will circle within the area of rising air to gain height. In the case of a cloud street thermals can line up with the wind creating rows of thermals and sinking air. A pilot can use a cloud street to fly long straight-line distances by remaining in the row of rising air.

Ridge lift
Ridge lift occurs when the wind meets a mountain, cliff or hill. The air is deflected up the windward face of the mountain, causing lift. Gliders can climb in this rising air by flying along the feature. Another name for flying with ridge lift is slope soaring.

Mountain waves
The third main type of lift used by glider pilots is the lee waves that occur near mountains. The obstruction to the airflow can generate standing waves with alternating areas of lift and sink. The top of each wave peak is often marked by lenticular cloud formations.

Convergence
Another form of lift results from the convergence of air masses, as with a sea-breeze front. More exotic forms of lift are the polar vortexes which the Perlan Project hopes to use to soar to great altitudes. A rare phenomenon known as Morning Glory has also been used by glider pilots in Australia.

All content from Kiddle encyclopedia articles (including the article images and facts) can be freely used under Attribution-ShareAlike license, unless stated otherwise. Cite this article:
Hang gliding Facts for Kids. Kiddle Encyclopedia.