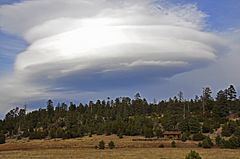 A lenticular cloud (Altocumulus lenticularis) is a type of cloud that forms at high altitudes. They are shaped like discs, and remain roughly in the same position. Because of the way they are shaped, they have been offered as an explanation for some UFO sightings. Lenticular clouds are formed when the wind forces the air up a mountain ridge to where the air is cooler and water vapor condenses.

All content from Kiddle encyclopedia articles (including the article images and facts) can be freely used under Attribution-ShareAlike license, unless stated otherwise. Cite this article:
Lenticular cloud Facts for Kids. Kiddle Encyclopedia.