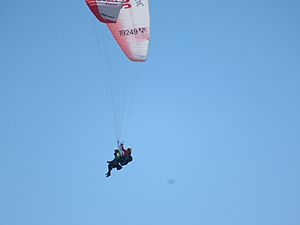 Paragliding is the recreational and competitive adventure sport of flying paragliders: lightweight, free-flying, foot-launched glider aircraft with no rigid primary structure. The pilot sits in a harness suspended below a fabric wing. Wing shape is maintained by the suspension lines, the pressure of air entering vents in the front of the wing, and the aerodynamic forces of the air flowing over the outside.

Despite not using an engine, paraglider flights can last many hours and cover many hundreds of kilometres, though flights of one to two hours and covering some tens of kilometres are more the norm. By skillful exploitation of sources of lift, the pilot may gain height, often climbing to altitudes of a few thousand metres.

In 1952 Canadian Domina Jalbert patented a governable gliding parachute with multi-cells and controls for lateral glide.

In 1954, Walter Neumark predicted (in an article in Flight magazine) a time when a glider pilot would be "able to launch himself by running over the edge of a cliff or down a slope ... whether on a rock-climbing holiday in Skye or ski-ing in the Alps."

In 1961, the French engineer Pierre Lemongine produced improved parachute designs that led to the Para-Commander. The PC had cutouts at the rear and sides that enabled it to be towed into the air and steered, leading to parasailing/parascending.

Domina Jalbert invented the Parafoil, which had sectioned cells in an aerofoil shape; an open leading edge and a closed trailing edge, inflated by passage through the air – the ram-air design. He filed US Patent 3131894 on January 10, 1963. 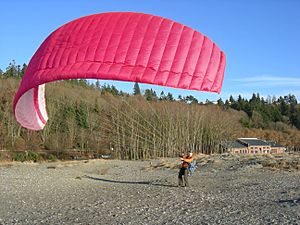 About that time, David Barish was developing the "sail wing" (single-surface wing) for recovery of NASA space capsules – "slope soaring was a way of testing out ... the Sail Wing." After tests on Hunter Mountain, New York, in September 1965, he went on to promote slope soaring as a summer activity for ski resorts.

Author Walter Neumark wrote Operating Procedures for Ascending Parachutes, and in 1973 he and a group of enthusiasts with a passion for tow-launching PCs and ram-air parachutes broke away from the British Parachute Association to form the British Association of Parascending Clubs (which later became the British Hang Gliding and Paragliding Association). In 1997, Neumark was awarded the Gold Medal of the Royal Aero Club of the UK. Authors Patrick Gilligan (Canada) and Bertrand Dubuis (Switzerland) wrote the first flight manual, The Paragliding Manual in 1985, coining the word paragliding.

These developments were combined in June 1978 by three friends, Jean-Claude Bétemps, André Bohn and Gérard Bosson, from Mieussy, Haute-Savoie, France. After inspiration from an article on slope soaring in the Parachute Manual magazine by parachutist and publisher Dan Poynter, they calculated that on a suitable slope, a "square" ram-air parachute could be inflated by running down the slope; Bétemps launched from Pointe du Pertuiset, Mieussy, and flew 100 m. Bohn followed him and glided down to the football pitch in the valley 1000 metres below. "Parapente" (pente being French for "slope") was born.

Europe has seen the greatest growth in paragliding, with France alone registering in 2011 over 25,000 active pilots.

All content from Kiddle encyclopedia articles (including the article images and facts) can be freely used under Attribution-ShareAlike license, unless stated otherwise. Cite this article:
Paragliding Facts for Kids. Kiddle Encyclopedia.