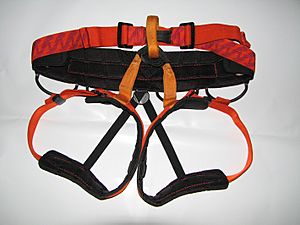 A climbing harness is an item of climbing equipment for rock-climbing, abseiling, or other activities requiring the use of ropes to provide access or safety such as industrial rope access, working at heights, etc. A harness secures a person to a rope or an anchor point.

In its simplest form, a harness can be made from a length of rope or a nylon webbing tied round the waist. More sophisticated harnesses exist in many patterns, designed to give greater comfort and security, and more options for carrying equipment.

While harnesses can be improvised, it is more common to use commercially produced harnesses, which often include padding and amenities such as gear loops.

The invention of the climbing harness has been attributed to Jeanne Immink, a Dutch climber in the late nineteenth century. Some of the first climbing harnesses were devised in the U.K. in the early 1960s by Alan Waterhouse, Paul Seddon and Tony Howard who went on to form the Troll climbing equipment manufacturers. A harness designed by British climber Don Whillans was made by Troll for the 1970 Annapurna South Face Expedition. It went into mass production shortly afterwards and soon became popular worldwide. 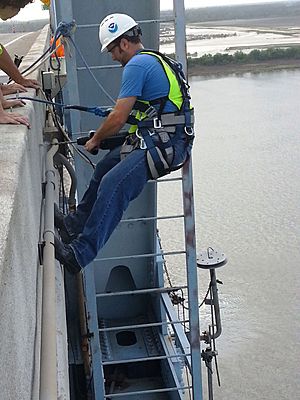 There are different types of harnesses.

All content from Kiddle encyclopedia articles (including the article images and facts) can be freely used under Attribution-ShareAlike license, unless stated otherwise. Cite this article:
Climbing harness Facts for Kids. Kiddle Encyclopedia.