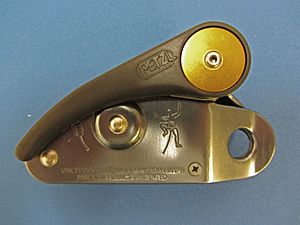 A Grigri is a securing device for rock climbing. Unlike many other securing devices, a Grigri is half-automatic. It works like a seat belt in a car. The rope can be slowly pulled through, but if there is lot of weight on the rope the Grigri locks the rope. "Grigri" is a trademark of the company Petzl, but because it was the first half-automatic securing device, many people call devices of other companies also Grigri.

All content from Kiddle encyclopedia articles (including the article images and facts) can be freely used under Attribution-ShareAlike license, unless stated otherwise. Cite this article:
Grigri Facts for Kids. Kiddle Encyclopedia.