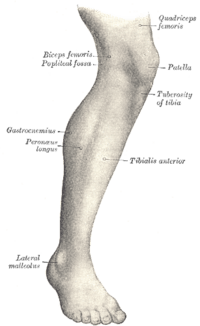 Animals normally have 2 or 4 legs (vertebrates, which are animals with a backbone), or 6, 8, or 12 (arthropods, for example insects and spiders). Centipedes and millipedes have a lot more legs, but not exactly a hundred or a thousand as their names make people who do not know them think. Humans have 2 legs, complete with feet.

People also use the word "leg" in idioms, for example:

A leg is a structure of gross anatomy, meaning that it is large enough to be seen unaided. The components depend on the animal. In humans and other mammals, a leg includes the bones, muscles, tendons, ligaments, blood vessels, nerves, and skin. In insects, the leg includes most of these things, except that insects have an exoskeleton that replaces the function of both the bones and the skin. 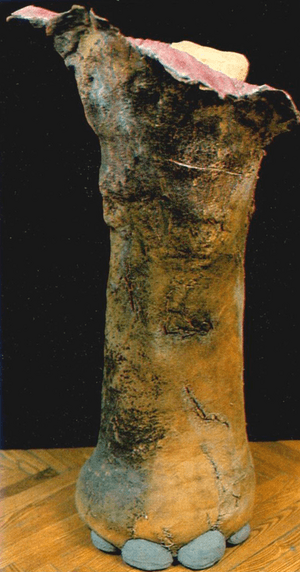 The leg of a wooly mammoth (reconstruction).

In tetrapod anatomy, leg is used to refer to the entire limb. In human medicine the precise definition refers only to the segment between the knee and the ankle. This lower segment is also called the shank, and the front (anterior) of the segment is called the shin or pretibia.

In bipedal tetrapods, the two lower limbs are referred to as the "legs" and the two upper limbs as "arms" or "wings" as the case may be.

The human leg, in the general meaning, is the entire lower limb of the human body, including the foot, thigh and even the hip or gluteal region. However, the definition in human anatomy refers only to the section of the lower limb extending from the knee to the ankle, also known as the crus. Legs are used for standing, and all forms of locomotion including recreational such as dancing, and constitute a significant portion of a person's mass. Female legs generally have greater hip anteversion and tibiofemoral angles, but shorter femur and tibial lengths than those in males.

A robotic leg is moved by an actuator, which is a type of motor for moving or controlling a mechanism or system. It is operated by a source of energy, usually in the form of an electric current, hydraulic fluid pressure or pneumatic pressure, and converts that energy into some kind of motion.

A prosthetic leg, a Prosthesis, is an artificial leg that is used to replace one that has been lost.

All content from Kiddle encyclopedia articles (including the article images and facts) can be freely used under Attribution-ShareAlike license, unless stated otherwise. Cite this article:
Leg Facts for Kids. Kiddle Encyclopedia.