Millipedes are a group of arthropods that are characterised by having two pairs of jointed legs on most body segments; they are known scientifically as the class Diplopoda. Most millipedes have very elongated round or flattened bodies with more than 20 segments, while pill millipedes are shorter and can roll into a ball. Although the name "millipede" comes from the Latin for "thousand feet", no known species has 1,000; the record of 750 legs belongs to Illacme plenipes.

There are approximately 12,000 named species classified into 16 orders and around 140 families, making Diplopoda the largest class of myriapods, an arthropod group which also includes centipedes and other multi-legged creatures. Most millipedes are slow-moving detritivores, eating decaying leaves and other dead plant matter. Some eat fungi or suck plant fluids, and a small minority are predatory.

Millipedes are generally harmless to humans, although some can become household or garden pests. Millipedes can be unwanted especially in greenhouses where they can cause severe damage to emergent seedlings. Most millipedes defend themselves with a variety of chemicals released from pores along the body, although the tiny bristle millipedes are covered with tufts of detachable bristles.

Approximately 12,000 millipede species have been described. Estimates of the true number of species on earth range from 15,000 to as high as 80,000. 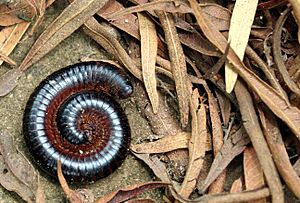 Millipedes are among the first animals to have colonised land during the Silurian period. Early forms probably ate mosses and primitive vascular plants. There are two major groups of millipedes whose members are all extinct: the Archipolypoda ("ancient, many-legged ones") which contain the oldest known terrestrial animals, and Arthropleuridea, which contain the largest known land invertebrates. 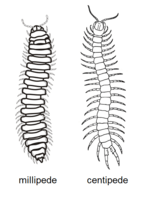 A comparison of a millipede and centipede, not to scale

The differences between millipedes and centipedes is a common question from the general public. Both groups of myriapods share similarities, such as long, multi-segmented bodies, many legs, a single pair of antennae, and the presence of postanntennal organs, but have many differences and distinct evolutionary histories. The head alone demonstrates the differences; millipedes have short, elbowed antennae for probing, a pair of powerful mandibles and a single pair of maxillae (paired structures present on the head as mouth-parts) fused into a lip; centipedes have long, threadlike antennae, a pair of small mandibles, two pairs of maxillae and a pair of large poison claws. 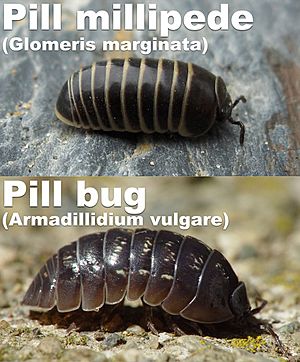 Comparison of a pill millipede (above: Glomeris marginata) and a pillbug (below: Armadillidium vulgare)

Oniscomorpha is a superorder of millipedes that are commonly called pill millipedes due to their resemblance to certain woodlice (Oniscidea), also called pill bugs or "roly-polies". However, millipedes and woodlice are not closely related; rather, this is a case of developing similar visual traits in the same environment, during evolution. 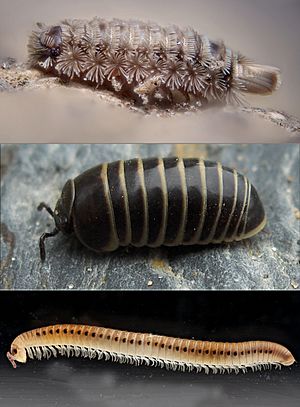 Millipedes come in a variety of body shapes and sizes, ranging from 2 mm (0.08 in) to around 35 cm (14 in) in length, and can have as few as eleven to over a hundred segments. They are generally black or brown in colour, although there are a few brightly coloured species, and some have aposematic colouring to warn that they are toxic. Species of Motyxia produce cyanide as a chemical defence and are bioluminescent.

Millipedes in several orders have keel-like extensions of the body-wall known as paranota, which can vary widely in shape, size, and texture; modifications include lobes, papillae, ridges, crests, spines and notches. Paranota may allow millipedes to wedge more securely into crevices, protect the legs, or make the millipede more difficult for predators to swallow. The legs are composed of seven segments, and attach on the underside of the body. The legs of an individual are generally rather similar to each other, although often longer in males than females. 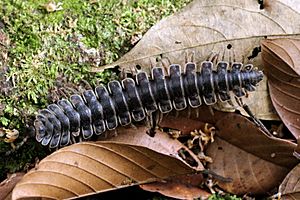 Millipedes breathe through two pairs of spiracles located on each segment near the base of the legs. Each opens into an internal pouch, and connects to a system of tracheae. The heart runs the entire length of the body, with an aorta stretching into the head. The excretory organs are two pairs of malpighian tubules, located near the mid-part of the gut. The digestive tract is a simple tube with two pairs of salivary glands to help digest the food. 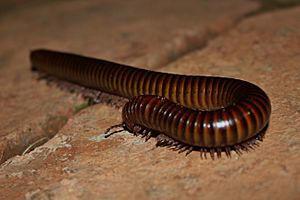 Females lay from ten to three hundred eggs at a time, depending on species. Many species deposit their eggs on moist soil or organic debris, but some construct nests and may protect the eggs within silk cocoons. In most species, the female abandons the eggs after they are laid, but some species provide parental care for eggs and young. The young hatch after a few weeks, and typically have only three pairs of legs, followed by up to four legless segments. As they grow, they continually moult, adding further segments and legs as they do so. 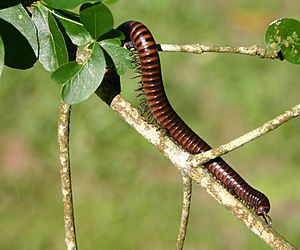 Millipedes occur on all continents except Antarctica. Typically forest floor dwellers, they live in leaf litter, dead wood, or soil, with a preference for humid conditions. In temperate zones, millipedes are most abundant in moist deciduous (tree's that shed leaves annually) forests, and may reach densities of over 1,000 individuals per square metre. Other habitats include coniferous forests, deserts, caves, and alpine ecosystems. Some species can survive freshwater floods and live submerged underwater for up to 11 months. A few species occur near the seashore and can survive in somewhat salty conditions. 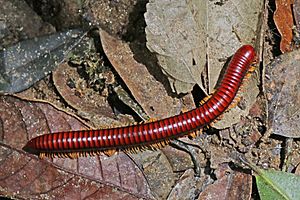 Millipedes generally have little impact on human economic or social well-being, especially in comparison with insects, although locally they can be a nuisance or agricultural pest. Millipedes do not bite, and their defensive secretions are mostly harmless to humans — usually causing only minor discolouration on the skin — but the secretions of some tropical species may cause pain, itching, local erythema, edema, blisters, eczema, and occasionally cracked skin. 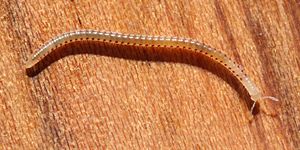 Some millipedes are considered household pests which can infest thatched roofs in India, and which periodically invade homes in Australia. Other species exhibit periodical swarming behaviour, which can result in home invasion and crop damage. 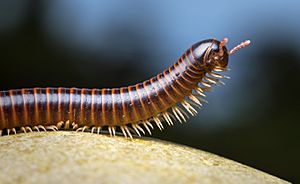 Some millipedes can cause significant damage to crops: the spotted snake millipede is a noted pest of sugar beets and other root crops. Some of the larger millipedes are popular as pets.

Millipedes have also inspired and played roles in scientific research. In 1963, a walking vehicle with 36 legs was designed, said to have been inspired by a study of millipede locomotion. Experimental robots have had the same inspiration, in particular when heavy loads are needed to be carried in tight areas involving turns and curves.

All content from Kiddle encyclopedia articles (including the article images and facts) can be freely used under Attribution-ShareAlike license, unless stated otherwise. Cite this article:
Millipede Facts for Kids. Kiddle Encyclopedia.