A woodlouse (plural woodlice) is a crustacean from the monophyletic suborder Oniscidea within the isopods. The first woodlice were marine isopods which are presumed to have colonised land in the Carboniferous. They have many common names and although often referred to as 'terrestrial Isopods' some species live semiterrestrially or have recolonised aquatic environments. Woodlice in the families Armadillidae, Armadillidiidae, Eubelidae, Tylidae and some other genera can roll up into a roughly spherical shape as a defensive mechanism; others have partial rolling ability but most cannot conglobate at all.

Woodlice have a basic morphology of a segmented, dorso-ventrally flattened body with seven pairs of jointed legs, specialised appendages for respiration and like other peracarids, females carry fertilised eggs in their marsupium, through which they provide developing embryos with water, oxygen and nutrients. The immature young hatch as mancae and receive further maternal care in some species. Juveniles then go through a series of moults before reaching maturity.

While the broader phylogeny of the Oniscideans has not been settled, five Infraorders/Sections are agreed on with 3,637 species validated in scientific literature in 2004 and 3,710 species in 2014 out of an estimated total of 5,000–7,000 species extant worldwide. Key adaptations to terrestrial life have led to a highly diverse set of animals; from the marine littoral zone and subterranean lakes to arid deserts and mountain slopes 4,725 m (15,500 ft) above sea-level, woodlice have established themselves in most terrestrial biomes and represent the full range of transitional forms and behaviours for living on land.

Woodlice are widely studied in the contexts of evolutionary biology, behavioural ecology and nutrient cycling. They are popular as terrarium pets because of their varied colour and texture forms, conglobating ability and ease of care.

Common names for woodlice vary throughout the English-speaking world. A number of common names make reference to the fact that some species of woodlice can roll up into a ball. Other names compare the woodlouse to a pig. 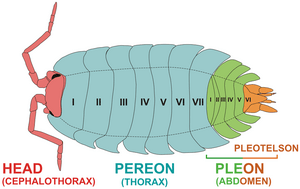 Basic body regions of the woodlouse

The woodlouse has a shell-like exoskeleton, which it must progressively shed as it grows. The moult takes place in two stages; the back half is lost first, followed two or three days later by the front. This method of moulting is different from that of most arthropods, which shed their cuticle in a single process.

A female woodlouse will keep fertilised eggs in a marsupium on the underside of her body until they hatch into offspring that look like small white woodlice curled up in balls. The mother then appears to "give birth" to her offspring. Females are also capable of reproducing asexually.

Despite being crustaceans like lobsters or crabs, woodlice are said to have an unpleasant taste.

Pillbugs (woodlice of the family Armadillidiidae, also known as pill woodlice) can be confused with pill millipedes of the order Glomerida. Both of these groups of terrestrial segmented arthropods are about the same size. They live in very similar habitats, and they can both roll up into a ball. Pill millipedes and pillbugs appear superficially similar to the naked eye. This is an example of convergent evolution. 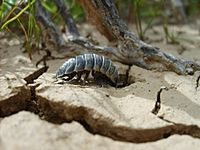 Hemilepistus reaumuri lives in "the driest habitat conquered by any species of crustacean".

Living in a terrestrial environment, woodlice breathe through trachea-like lungs in their paddle-shaped hind legs (pleopods), called pleopodal lungs. Woodlice need moisture because they rapidly lose water by excretion and through their cuticle, and so are usually found in damp, dark places, such as under rocks and logs, although one species, the desert dwelling Hemilepistus reaumuri, inhabits "the driest habitat conquered by any species of crustacean". They are usually nocturnal and are detritivores, feeding mostly on dead plant matter.

A few woodlice have returned to water. Evolutionary ancient species are amphibious, such as the marine-intertidal sea slater (Ligia oceanica), which belongs to family Ligiidae. Other examples include some Haloniscus species from Australia (family Scyphacidae), and in the northern hemisphere several species of Trichoniscidae and Thailandoniscus annae (family Styloniscidae). Species for which aquatic life is assumed include Typhlotricholigoides aquaticus (Mexico) and Cantabroniscus primitivus (Spain). 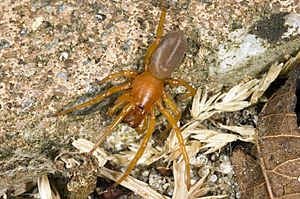 Woodlice are the most common prey of the spider Dysdera crocata.

Although woodlice, like earthworms, are generally considered beneficial in gardens for their role in controlling pests, producing compost and overturning the soil, they have also been known to feed on cultivated plants, such as ripening strawberries and tender seedlings.

Woodlice can also invade homes en masse in search of moisture and their presence can indicate dampness problems. They are not generally regarded as a serious household pest as they do not spread disease and do not damage sound wood or structures.

All content from Kiddle encyclopedia articles (including the article images and facts) can be freely used under Attribution-ShareAlike license, unless stated otherwise. Cite this article:
Woodlouse Facts for Kids. Kiddle Encyclopedia.