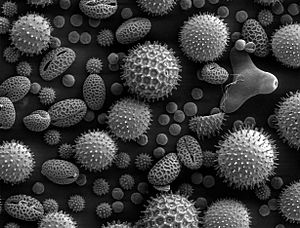 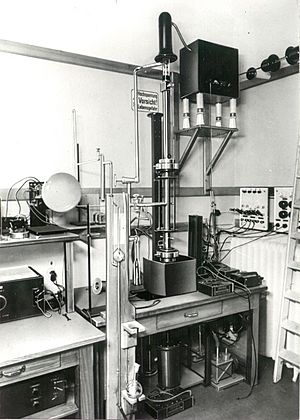 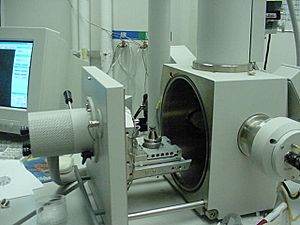 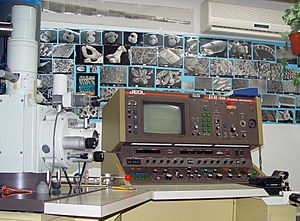 When an electron hits the surface, it may be reflected (backscattered), absorbed, or conducted away. Electrons that are absorbed can cause the atom that they hit to become unstable, forcing it to give off another electron (a secondary electron), or to give off light in order to stabilize. Different detectors, for the different types of reactions, may be fitted to an electron microscope, depending on what is being looked for.

The magnification that can be achieved in a scanning electron microscope depends on how narrow the beam of electrons that strikes the surface can be, and can reach 1 nanometer, about the size of 3 to 5 atoms. The control of the beam is achieved using magnetic fields, with other magnetic fields being used to shape the beam, and to move it across the sample. The range of magnification may range from 30x to as high as 500,000x.

The electron beam is affected by air and water molecules, so the sample must be placed in a vacuum. The sample must also be conductive to allow the electrons not reflected or absorbed to be conducted away. This gives some limits on the type of sample that can be used. In the case of samples from plants or animals, it often means that they must first be coated in gold before they can be placed in the microscope. This is done in order to preserve the sample and keep it from changing or decaying throughout the scanning process.

The scanning electron microscope is made up of several components:

1. The electron gun is located at the very top or bottom of an SEM and is used to fire a beam of electrons at the object that we are looking at under SEM.

2. The lenses are used to focus electron beams so that we can get clear and detailed images of the examined object. They are not made of glass, but they are made of magnets that change the path of electrons created from the electron gun.

3. The sample chamber is the area where the specimen of interest is examined under SEM. As the technique is very sensitive, the chamber must be very sturdy and have no vibrations happen. This is to allow for the specimen to be kept very still in order for the SEM to produce good images.

4. The detector is the "eyes" of the microscope. It is able to produce the most detailed images of a specimen's surface. Many different detectors can be used depending upon the information wanted from the sample used.

5. The vacuum chamber is used to keep the electron beam from constant interference from air. The air particles are bad for electron beams in that the electrons would be knocked out of the air and onto the specimen, which will produce bad distorted surfaces of the specimen.

All content from Kiddle encyclopedia articles (including the article images and facts) can be freely used under Attribution-ShareAlike license, unless stated otherwise. Cite this article:
Scanning electron microscope Facts for Kids. Kiddle Encyclopedia.