A centipede is an arthropod with many legs. Centipedes are predators. They hunt during the night; they are nocturnal. Some centipedes are venomous, though none can kill a human that is not allergic. Centipedes are in the class Chilopoda, and related to millipedes, which are not poisonous. As the millipedes, they are segmented. They have between 5 and 173 segments, but only one pair of legs per segment. There may be 8,000 species in the world.

The house centipede is a carnivore that feeds on cockroaches, house flies and other domestic pests. It is therefore beneficial. But because it has a scary appearance it is often exterminated.

Some species of centipedes can be hazardous to humans because of their venomous bites. Although a bite to an adult human may only be painful, those with allergies that are similar to that of bee stings and small children are at greater risk. Smaller centipedes usually do not puncture human skin.

Centipedes are an exclusively predatory taxon. They are known as generalist predators which means that they have adapted to eat a variety of different available prey items. Centipedes are also known to be nocturnal. Studies on centipede activity rhythms confirm this, although there are a few observations of centipedes active during the day and one species Strigamia chinophila that is diurnal. What centipedes actually eat is not well known because of their cryptic lifestyle and thorough mastication of food. Laboratory feeding trials support that they will feed as generalists, taking most anything that is soft-bodied and in a reasonable size range. It has been suggested that earthworms provide the bulk of diets for Geophilomorphs, since geophilomorphs burrow through the soil and earthworm bodies would be easily pierced by their poison claws. Observations suggest that Geophilomorphs cannot subdue earthworms larger than themselves, and so smaller earthworms may be a substantial proportion of their diet. Scolopendromorphs, given their size, are able to feed on vertebrates as well as invertebrates. They have been observed eating reptiles, amphibians, small mammals, bats and birds. Collembola may provide a large proportion of Lithiobiomorph diet. Little is known about Scutigeromorph or Craterostigmomorph diets. All centipedes are potential intraguild predators. Centipedes and spiders may frequently prey on one another.Video

Centipedes are eaten by a great many vertebrates and invertebrates, and form the staple diet of some. The African ant Amblyopone pluto feeds solely on Geophilomorphs and the South African Cape Black-headed snake Aparallactus capensis mainly feeds on centipedes.

Centipedes are found in moist microhabitats. Water relations are an important aspect of their ecology, since they lose water rapidly in dry conditions. Water loss is a result of centipedes lacking a waxy covering of their exoskeleton and excreting waste nitrogen as ammonia, which requires extra water. Centipedes deal with water loss through a variety of adaptations. Geophilomorphs lose water less rapidly than Lithobiomorps even though they have a greater surface area to volume ratio. This may be explained by the fact that Geophilomorphs have a more heavily sclerotized pleural membrane. Spiracle shape, size and ability to constrict also have an influence on rate of water loss. In addition, it has been suggested that number and size of coxal pores may be variables affecting centipede water balance.

Centipedes live in many different habitat types; forest, savannah, prairie, and desert to name a few. Some Geophilomorphs are adapted to littoral habitats, where they feed on barnacles. Species of all orders excluding Craterostigmomorpha have adapted to caves. Centipede densities have been recorded as high as 600/m2 and biomass as high as 500 mg/m2 wet weight. Small Geophilomorphs attain highest densities, followed by small Lithobiomorphs. Large Lithobiomorphs attain densities of 20/m2. One study of Scolopendromorphs records Scolopendra morsitans in a Nigerian savannah at a density of 0.16/m2 and a biomass of 140 mg/m2 wet weight. 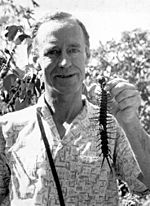 Scolopendra gigantea, also known as the Amazonian giant centipede, is the largest existing species of centipede in the world, reaching over 30 cm (12 in) in length. It is known to eat bats, catching them in midflight, as well as rodents and spiders. The now extinct Euphoberia was the largest centipede, growing up to one metre (39 inches) in length.

There are rumors that state that the Galápagos Islands giant centipede (Scolopendra galapagoensis) can reach sizes of up to 60 cm (25 in), although these rumours may result from the rarity of the particular centipede. Captive Galapagos centipedes don't often exceed 20 cm (8 in) in body length.[1]

All content from Kiddle encyclopedia articles (including the article images and facts) can be freely used under Attribution-ShareAlike license, unless stated otherwise. Cite this article:
Centipede Facts for Kids. Kiddle Encyclopedia.