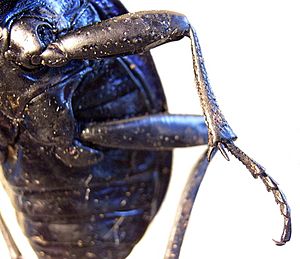 Appendages are parts of animals attached the main body. Many arthropods have appendages on each, or most, of their segments. Millipedes, for example, have many segments, and almost all carry two legs. Insects have exactly six legs, two on each segment of the thorax. Antennae (feelers) attached to their heads are another type of appendage.

Wings, parts of the tail, legs, some mouthparts, external sex organs can all be described as appendages.

All arthropod appendages are variations of the same basic structure (homologous). Which structure is produced is controlled by homeobox genes. Changes to these genes have allowed scientists to produce animals (such as Drosophila melanogaster) with modified appendages, such as legs instead of antennae.

All content from Kiddle encyclopedia articles (including the article images and facts) can be freely used under Attribution-ShareAlike license, unless stated otherwise. Cite this article:
Appendage Facts for Kids. Kiddle Encyclopedia.