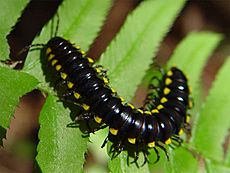 A millipede: a really obvious example of segmentation

Vertebrates have a segmented vertebral column.

Segmentation in biology means the division of some animal and plant bodies into a series of repeat sections or parts. It is common in some of the most successful groups of animals, such as arthropods, vertebrates and annelid worms.

We now know a good deal about how the development of segmented animals is controlled. In a series of experiments with the fruit-fly Drosophila, E.B. Lewis was able to identify a complex of genes whose proteins bind to the regulatory regions of target genes. The latter then activate or repress cell processes which direct the final development of the organism.

Furthermore, the sequence of these control genes show co-linearity: the order of the loci in the chromosome parallels the order in which the loci are expressed along the anterior-posterior axis of the body. Not only that, but this cluster of master control genes programs the development of all higher organisms.

Each of the genes contains a homeobox, a remarkably conserved DNA sequence. This suggests the complex itself arose by gene duplication.

In his Nobel lecture, Lewis said "Ultimately, comparisons of the [control complexes] throughout the animal kingdom should provide a picture of how the organisms, as well as the [control genes] have evolved".

All content from Kiddle encyclopedia articles (including the article images and facts) can be freely used under Attribution-ShareAlike license, unless stated otherwise. Cite this article:
Segmentation Facts for Kids. Kiddle Encyclopedia.