A mongoose (plural Mongooses, alternatively Mongeese) is a member of the family Herpestidae, a family of small cat-like carnivores. Mongooses are widely distributed in Asia, Africa the Caribbean, and southern Europe.

Mongooses live in southern Asia, Africa, and southern Europe, as well as in Fiji, Puerto Rico, and some Caribbean and Hawaiian islands, where they are an introduced species.

Some species lead predominantly solitary lives, seeking out food only for themselves, while others travel in groups, sharing food among group members and offspring.

Mongooses also have receptors for acetylcholine that, like the receptors in snakes, are shaped so that it is impossible for snake neurotoxin venom to attach to them. Mongooses are one of four known mammalian species with mutations that protect against snake venom. Pigs, honey badgers, hedgehogs, and mongooses all have modifications that prevents the snake venom α-neurotoxin from binding.

In contrast to the arboreal, nocturnal viverrids, mongooses are more commonly terrestrial and many are active during the day. 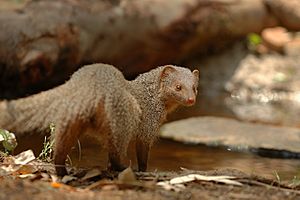 The Egyptian mongoose (Herpestes ichneumon) is sometimes held as an example of a solitary mongoose, though it has been observed to work in groups. 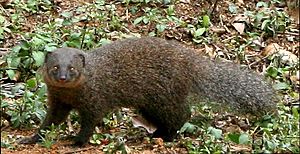 The Indian gray mongoose and others are well known for their ability to fight and kill venomous snakes, particularly cobras. They are adept at such tasks due to their agility, thick coats, and specialized acetylcholine receptors that render them resistant or immune to snake venom. However, they typically avoid the cobra and have no particular affinity for consuming its meat.

Some species can learn simple tricks. They can be semi-domesticated and are kept as pets to control vermin. However, they can be more destructive than desired; when imported into the West Indies to kill rats, they destroyed most of the small, ground-based fauna. For this reason, it is illegal to import most species of mongooses into the United States, Australia, and other countries. Mongooses were introduced to Hawaii in 1883 and have had a significant adverse effect on native species.

The mongoose emits a high-pitched noise, commonly known as giggling, when it mates. Giggling is also heard during courtship.

It is not yet known how long a mongoose lives in its natural habitat; however, it is known that the average lifespan in captivity is twenty years. 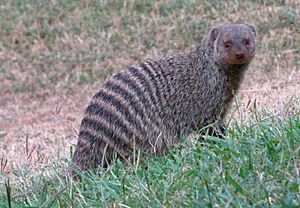 In ancient Mesopotamia, mongooses were sacred to the deity Ningilin, who was conflated with Ningirima, a deity of magic who was invoked for protection against serpents. According to a Babylonian popular saying, when a mouse fled from a mongoose into a serpent's hole, it announced, "I bring you greetings from the snake-charmer!" A creature resembling a mongoose also appears in Old Babylonian glyptic art, but its significance is not known.

According to Greek historian Diodorus Siculus (1.35 & 1.87), Egyptians venerated native mongooses for their ability to handle venomous snakes and for their occasional diet of crocodile eggs.

The Buddhist god of wealth Vaiśravaṇa, or Dzambala for Tibetans, is frequently depicted holding a mongoose that is spitting jewels from its mouth.

The Hindu god of wealth, Kubera (being the son of Vishrava ("Fame"), Kubera is also called Vaisravana), is often portrayed holding a mongoose in his left hand, hence the sight of a mongoose is considered lucky by some.

All mongoose species, except for Suricata suricatta, are not alowed to be imported into New Zealand.

Mongooses are a common spectacle at roadside shows in Pakistan. Snake charmers keep mongooses for mock fights with snakes.

A well-known mongoose written in fiction is Rikki-Tikki-Tavi, who has a short story of the same title in The Jungle Book (1894) by Rudyard Kipling. In this story set in India, the young mongoose saves his family from a krait and from two cobras, named Nag and Nagaina. This story was later made into several movies, and also a song by Donovan.

There is a Mongoose fictional character in Bram Stoker's novel, The Lair of the White Worm. The main character, Adam Salton, buys one to hunt snakes.

All content from Kiddle encyclopedia articles (including the article images and facts) can be freely used under Attribution-ShareAlike license, unless stated otherwise. Cite this article:
Mongoose Facts for Kids. Kiddle Encyclopedia.