The honey badger or ratel (Mellivora capensis) is a type of mustelid. It lives in Africa, the Middle East, and the Indian subcontinent.

Despite its name, the honey badger does not look much like other types of badgers. It looks more like a weasel. It mostly eats meat, and does not have many predators because of its thick skin and tough defensive ability.

The honey badger is the only member of the genus Mellivora. Although it was first put to the badger group in the 1860s, they do not have much in common with the subfamily Melinae. They are closer to the marten family.

The honey badger has a fairly long body, but is thick set and broad across the back. Its skin is loose, and lets it to turn and twist freely within it. The skin around the neck is 6 millimetres (0.24 in) thick, an adaptation to fighting each other. The head is small and flat, with a short muzzle. The eyes are small, and the ears are little more than ridges on the skin. These are also possible adaptations to avoiding damage while fighting.

The honey badger has short and sturdy legs, with five toes on each foot. The feet have very strong claws, which are short on the hind legs and very long on the forelimbs. It is a partially plantigrade animal whose soles are thickly padded and naked up to the wrists. The tail is short and is covered in long hairs, except below the base.

Its winter fur is long, with some coarse, bristle-like hairs. There are fewer hairs on the side, belly, and groin. The summer fur is shorter and has even fewer hairs, with the belly being half bare. The sides of the heads and lower body are pure black in colour. A large white band covers their upper bodies, beginning from the top of their heads down to the base of their tails. 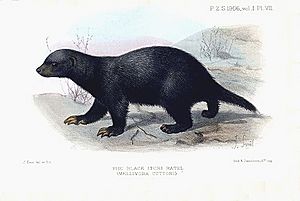 Honey badgers live alone in self-dug holes. They are good diggers, being able to dig tunnels into hard ground in 10 minutes. These burrows always only have one passage and a nesting chamber and are usually not large, about 1–3 metres long. They do not put bedding in the nesting chamber. Although they usually dig their own burrows, they may take over aardvark and warthog holes that are no longer being used, or termite mounds.

Honey badgers are smart animals and are one of few species able to use tools. In the 1997 documentary series Land of the Tiger, a honey badger in India was filmed using a tool; the animal rolled a log and stood on it to reach a kingfisher fledgling stuck up in the roots coming from the ceiling in an underground cave.

Honey badgers are fearless and tough animals. They are known to savagely attack their enemies when they cannot escape. They are tireless in combat and can wear out much larger animals in fights. The fact that most predators do not want to hunt honey badgers has led to the theory that the countershaded coats of cheetah kittens evolved to look like the honey badger in order to keep predators away. This would be an example of mimicry.

The voice of the honey badger is a hoarse "khrya-ya-ya-ya" sound. When mating, males make loud grunting sounds. Cubs vocalise through whines. When attacked by dogs, honey badgers scream like bear cubs.

Honey badgers have the least specialised diet among mustelids. In undeveloped areas, honey badgers may hunt at any time of the day, though they become nocturnal in places with high human populations. When hunting, honey badgers trot with their fore-toes turned in, moving at the same speed as a young man. Despite their name, honey badgers mostly eat meat, and will take any sort of animal food at hand, including carrion, small rodents, birds, eggs, insects, lizards, tortoises and frogs. They will eat fruit and vegetables such as berries, roots and bulbs.

They may hunt frogs and rodents such as gerbils and ground squirrels by digging them out of their burrows. Honey badgers are able to feed on tortoises without difficulty, due to their powerful jaws. They kill and eat snakes, even highly venomous or large ones. They have dug up human corpses in India. They devour all parts of their prey, including skin, hair, feathers, flesh and bones, holding their food down with their forepaws. When seeking vegetable food, they lift stones or tear bark from trees.

The species can be found through most of Sub-Saharan Africa from the Western Cape, South Africa, to southern Morocco and southwestern Algeria. Outside Africa it lives through Arabia, Iran and western Asia to Turkmenistan and the Indian subcontinent.

Honey badgers often kill chickens that humans are raising for food. Because of their strength and persistence, they are difficult to keep away. They are known to rip thick planks from hen-houses or burrow underneath stone foundations.

Because of their tough, loose skin, honey badgers are difficult to kill with dogs. Their skin is hard to get through, and its looseness allows them to twist and turn on their attackers when held. The only safe grip on a honey badger is on the back of the neck. The skin is also tough enough to resist several machete blows. The only sure way of killing them quickly is through a blow to the skull with a club or a shot to the head with a powerful rifle, as their skin is almost proof against arrows and spears.

All content from Kiddle encyclopedia articles (including the article images and facts) can be freely used under Attribution-ShareAlike license, unless stated otherwise. Cite this article:
Honey badger Facts for Kids. Kiddle Encyclopedia.