The Aardvark (Orycteropus afer) is a mammal from Africa; its name means "earth pig" in the language Afrikaans. It is the only living member in its order, though some fossil genera have been found. 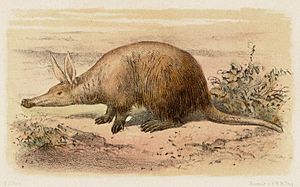 Illustration of an aardvark 1870

It is sometimes called "African antbear", "anteater", or the "Cape anteater" after the Cape of Good Hope. The name comes from earlier Afrikaans (erdvark) and means "earth pig" or "ground pig" (aarde earth/ground, vark pig), because of its burrowing habits (similar origin to the name groundhog).

The closest living relatives of the aardvark are the elephant shrews, along with the sirenians, hyraxes, tenrecs, and elephants.

Fossils from the aardvark have been dated to 5 million years, and have been located throughout Europe and Asia. A close relative lived in Madagascar during the last ice age. 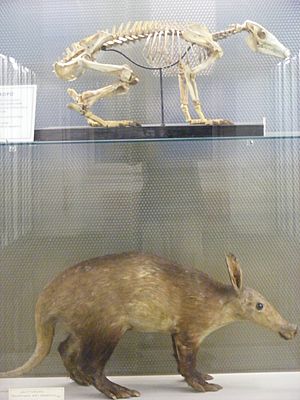 An aardvark skeleton and mounted individual

The aardvark is vaguely pig-like in appearance. Its body is stout with an arched back and is sparsely covered with coarse hairs. The limbs are of moderate length. The front feet have lost the pollex (or 'thumb'), resulting in four toes, while the rear feet have all five toes. Each toe bears a large, robust nail which is somewhat flattened and shovel-like, and appears to be between a claw and a hoof.

The ears are long, and the tail is very thick at the base and gradually tapers. The greatly elongated head is set on a short, thick neck, and the end of the snout bears a disc, which has the nostrils. The snout resembles an elongated pig snout.

The mouth is small and tubular, typical of species that feed on ants and termites.

The aardvark has a long, thin, snakelike, protruding tongue (as much as 30 centimetres (12 in) long) and has a keen sense of smell. 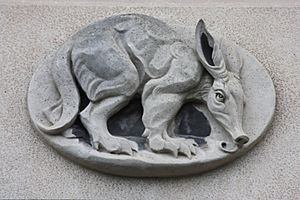 The aardvark is pale yellowish-gray in color and often stained reddish-brown by soil and it has a thin coat of hair, the animal's primary protection is its tough skin. It has been known to sleep in a recently excavated ant nests, which also serves as protection from its predators. 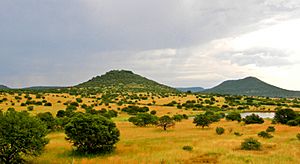 Aardvarks live in sub-Saharan Africa, where there is suitable habitat for them to live, such as savannas, grasslands, woodlands and bushland, and available food (i.e., ants and termites).

The only major habitat that they are not present in is swamp forest. They have been documented as high as 3,200 metres (10,500 ft) in Ethiopia. They are known to live throughout sub-Saharan Africa all the way to South Africa with few exceptions. 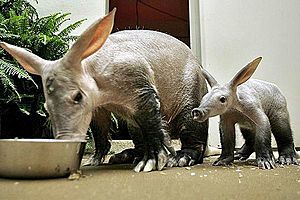 The aardvark is nocturnal and is a solitary creature that feeds almost exclusively on ants and termites, the only fruit eaten by aardvarks is the aardvark cucumber.

An aardvark emerges from its burrow in the late afternoon or shortly after sunset, and forages over a considerable home range of 10 to 30 km, swinging its long nose from side to side to pick up the scent of food. When a concentration of ants or termites is detected, the aardvark digs into it with its powerful front legs, keeping its long ears upright to listen for predators 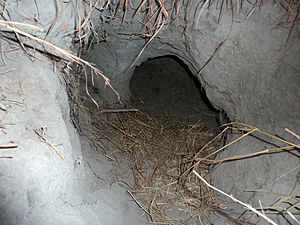 Entrance to a burrow

It can dig 2 feet in 15 seconds, but otherwise moves fairly slowly. Its claws enable it to dig through the extremely hard crust of a termite or ant mound quickly, avoiding the dust by sealing the nostrils. When successful, the aardvark's long (up to 30 centimetres (12 in)) tongue licks up the insects; the termites' biting, or the ants' stinging attacks are rendered futile by the tough skin. Its keen hearing warns it of predators: lions, leopards, hyenas, and pythons.

Aside from digging out ants and termites, the aardvark also excavates burrows in which to live; temporary sites are scattered around the home range as refuges, and a main burrow is used for breeding. Main burrows can be deep and extensive, have several entrances and can be as long as 13 metres (43 ft). These burrows can be large enough for a man to enter. The aardvark changes the layout of its home burrow regularly, and from time to time moves on and makes a new one; the old burrows are then inhabited by smaller animals like the African wild dog. 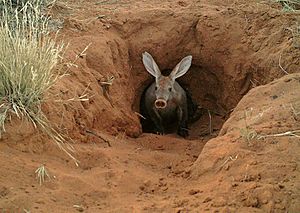 Emerging from a burrow

Only mothers and young share burrows; however, the aardvark is known to live in small family groups or as a solitary creature. If attacked in the tunnel, it will escape by digging out of the tunnel thereby placing the fresh fill between it and its predator, or if it decides to fight it will roll onto its back, and attack with its claws.

Aardvarks pair only during the breeding season; after a gestation period of seven months, one cub weighing around 2 kilograms (4.4 lb) is born during May–July, and is able to leave the burrow to accompany its mother after only two weeks, and is eating termites at 14 weeks and is weaned by 16 weeks. At six months of age it is able to dig its own burrows, but it will often remain with the mother until the next mating season. 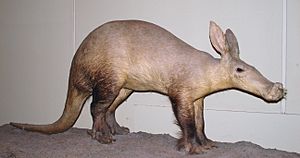 Example of an Aardvark

Aardvarks live for up to 24 years in captivity.

The aardvark's main predators are lions, leopards, hunting dogs and pythons. Some African tribes also hunt aardvarks for meat. Aardvarks can dig fast or run in zigzag fashion to elude enemies, but if all else fails, they will strike with their claws, tail and shoulders, sometimes flipping onto their backs to lash with all fours. Their thick skin also protects them to some extent. 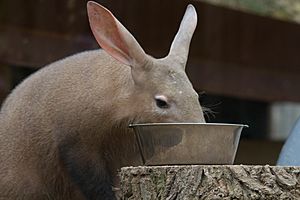 Aardvarks were thought to have declining numbers, however this is due to the fact that they are not readily seen. There are no accurate counts due their secretive nature; however their numbers seem to be stable overall. There may be a slight decrease in numbers in eastern, northern, and western Africa.

Southern African numbers are not decreasing. It receives an official designation from the IUCN as least concern. 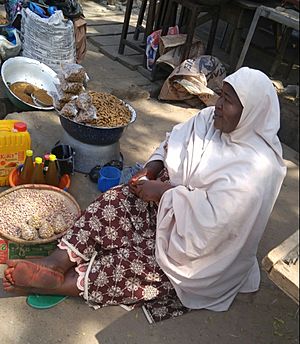 In African folklore, the aardvark is much admired because of its hard working quest for food and its fearless response to soldier ants. Hausa magicians make a charm from the heart, skin, forehead, and nails of the aardvark, which they then proceed to pound together with the root of a certain tree. Wrapped in a piece of skin and worn on the chest, the charm is said to give the owner the ability to pass through walls or roofs at night. The charm is said to be used by burglars. Also, some tribes will use their teeth to make bracelets that are regarded as good luck charms.

The Egyptian god Set is said (by some) to have the head of an aardvark or to be part aardvark.

The character of Arthur is an aardvark, it is an animated television series for children is based on a book series and produced by WGBH, shown in more than 180 countries.

All content from Kiddle encyclopedia articles (including the article images and facts) can be freely used under Attribution-ShareAlike license, unless stated otherwise. Cite this article:
Aardvark Facts for Kids. Kiddle Encyclopedia.