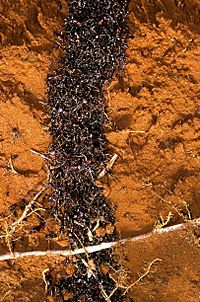 Army ant (or legionary ant or "Marabunta") means over 200 ant species. They are called army ants due to their aggressive predatory groups looking for food, known as "raids", in which many ants look for food at the same time in one place, attacking other animals en masse.

Most ant species make homes where they always live. Army ants do not. They keep moving. All army ant species are members of the ant family, Formicidae, but there are several kinds that have evolved on their own the same behavior. This is called "legionary behavior", and is convergent evolution. 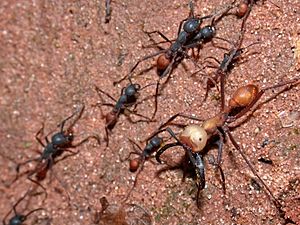 Males are large in size and have a large cylindrical abdomen, highly modified mandibles and uncommon genitalia not seen in other ants. They have 13 segments on their antennae, are alated (have wings) and therefore can resemble wasps. Males are born as part of a sexual brood. As soon as they are born, they will fly off in search of a queen to mate with. In some instances where males seek to mate with a queen from an existing colony, the receiving workers will forcibly remove the wings in order to accommodate the large males into the colony for mating. Because of their size, males are sometimes called "sausage flies" or "sausage ants."

Colonies of real army ants always have only one queen, while some other ant species can have several queens. The queen is dichthadiigyne (a blind ant with large gaster) but may sometimes possess vestigial eyes. The queens of army ants are unique in that they do not have wings, have an enlarged gaster size and an extended cylindrical abdomen. They are significantly larger than worker army ants and possess 10–12 segments on their antennae. Queens will mate with multiple males and because of their enlarged gaster, can produce 3 to 4 million eggs a month, resulting in synchronized brood cycles and colonies composed of millions of individuals all related to a single queen. 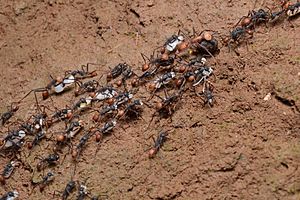 E. vagans with larvae of a raided wasp nest 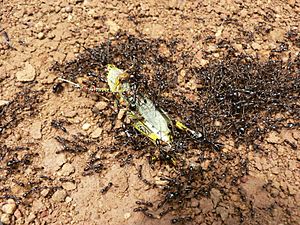 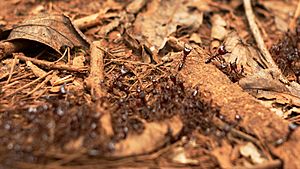 Safari ants (Dorylus sp.) on a march in Kakamega Forest, Kenya. The soldiers have created a tunnel through which the workers move, and clearly show their mandibles

The army ant syndrome refers to behavioral and reproductive traits such as obligate collective foraging, nomadism and highly specialized queens that allow these organisms to become the most ferocious social hunters.

Most ant species will send individual scouts to find food sources and later recruit others from the colony to help; however, army ants dispatch a cooperative, leaderless group of foragers to detect and overwhelm the prey at once. Army ants do not have a permanent nest but instead form many bivouacs as they travel. The constant traveling is due to the need to hunt large amounts of prey to feed its enormous colony population. Their queens are wingless and have abdomens that expand significantly during egg production. This allows for the production of 3-4 million eggs every month and often results in synchronized brood cycles, thus each colony will be formed of millions of individuals that descend from a single queen. All three of these traits are found to be in all army ant species and the defining traits of army ants.

Army ants have two phases of activity—a nomadic (wandering) phase and a stationary (statary) phase—that constantly cycle, and can be found throughout all army ants species.

The nomadic phase begins around 10 days after the queen lays her eggs. This phase will last approximately 15 days to let the larvae develop. The ants move during the day, capturing insects, spiders, and small vertebrates to feed their brood. At dusk, they will form their nests or bivouac, which they change almost daily. At the end of the nomadic phase, the larvae will spin pupal cases and no longer require food. The colony can then live in the same bivouac site for around 20 days, foraging only on approximately two-thirds of these days. Among the army ants are some species that venture out only at night, but no adequate studies of their activities have been made.

The stationary phase, which lasts about two to three weeks, begins when the larvae pupate. From this point on, the prey that were previously fed to the larvae are now fed exclusively to the queen. The abdomen (gaster) of the queen swells significantly, and she lays her eggs. At the end of the stationary phase, both the pupae emerge from their cocoons (eclosion) and the next generation of eggs hatch so the colony has a new group of workers and larvae. After this, the ants resume the nomadic phase. 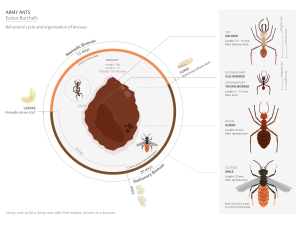 Behavior and organization of bivouac

Army ants will split into groups when the size of the colony has reached a size threshold which happens approximately every three years. Wingless virgin queens will hatch among a male sexual brood that will hatch at a later date. When the colony fissions, there are two ways new queens are decided. A possible outcome is a new queen will stay at the original nest with a portion of the workers and the male brood while the old queen will leave with the other portion of workers and find a new nest. Another possibility is that the workers will reject the old queen and new queens will head the two new colonies. The workers will affiliate with individual queens based on the pheromone cues that are unique to each queen. When new bivouacs are formed, communication between the original colony and the new bivouacs will cease to exist.

Being the largest ants on Earth, army ants, such as African Dorylus queens have the greatest reproductive potential among the insects, with an egg-laying capacity of several millions per month. Army ant queens never have to leave the protection of the colony, where they mate with foreign incoming males which disperse on nuptial flights. The exact mating behavior of the army ant queen is still unknown, but observations seem to imply that queens may be fertilized by multiple males. Due to the queen's large reproductive potential, one colony of army ants can be related to a single queen.

When the queen ant dies, there is no replacement and army ants cannot rear emergency queens. Most of the time, if the queen dies, the colony will most likely die too. Queen loss can occur due to accidents during emigrations, predator attack, old age or illness. However, there are possibilities to avoid colony death. When a colony loses its queen, the worker ants will usually fuse with another colony that has a queen in a few days. Sometimes, the workers will backtrack along the paths of prior emigrations to search for a queen that has been lost or merge with a sister colony. By merging with a related colony, the workers would increase their overall inclusive fitness. The workers that merge into a new colony may cause the colony to increase in size by 50%.

The whole colony of army ants can consume up to 500,000 prey animals each day, so can have a significant influence on the population, diversity, and behavior of their prey. The prey selection differs with the species.

Underground species prey primarily on ground-dwelling arthropods and their larvae, earthworms, and occasionally also the young of vertebrates, turtle eggs, or oily seeds. A majority of the species, the "colony robbers", specialize in the offspring of other ants and wasps. Only a few species seem to have the very broad spectrum of prey seen in the raiding species. Even these species do not eat every kind of animal. Although small vertebrates that get caught in the raid will be killed, the jaws of the American Eciton are not suited to this type of prey, in contrast to the African Dorylus. These undesired prey are simply left behind and consumed by scavengers or by the flies that accompany the ant swarm. Only a few species hunt primarily on the surface of the earth; they seek their prey mainly in leaf litter and in low vegetation. About five species hunt in higher trees, where they can attack birds and their eggs, although they focus on hunting other social insects along with their eggs and larvae. Colonies of army ants are large compared to the colonies of other Formicidae. Colonies can have over 15 million workers and can transport 3000 prey (items) per hour during the raid period.

While foraging, army ants cause many invertebrates to flee from their hiding places under leaves of the forest floor, under tree bark, and other such locations, thereby allowing predators to catch them more easily. For example, in the tropical rainforests of Panama, swarms of army ants attract many species of birds to this feast of scrambling insects, spiders, scorpions, worms, and other animals. Some of these birds are named “antbirds” due to this tendency. While focused on feeding on these invertebrates, birds at army-ant swarms typically allow very close approach by people—within 1 or 2 meters in many cases—often providing the best opportunities to see many of these species. Depending on the size of the ant swarm and the amount of prey the ants stir up, birds can number from a few to dozens of individuals. Birds that frequent army-ant swarms include the white-whiskered puffbird, rufous motmot, rufous-vented ground cuckoo, gray-necked wood rail, plain-brown woodcreeper, northern barred woodcreeper, cocoa woodcreeper, black-striped woodcreeper, fasciated antshrike, black-crowned antshrike, spotted antbird, bicolored antbird, ocellated antbird, chestnut-backed antbird, black-faced antthrush, and gray-headed tanager. 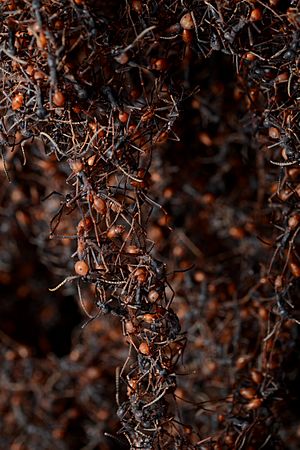 Army ants do not build a nest like most other ants. Instead, they build a living nest with their bodies, known as a bivouac. Bivouacs tend to be found in tree trunks or in burrows dug by the ants. The members of the bivouac hold onto each other's legs and so build a sort of ball, which may look unstructured to a layman's eyes, but is actually a well-organized structure. The older female workers are located on the exterior; in the interior are the younger female workers. At the smallest disturbance, soldiers gather on the top surface of the bivouac, ready to defend the nest with powerful pincers and (in the case of the Aenictinae and Ecitoninae) stingers. The interior of the nest is filled with numerous passages and contains many chambers with food, the queen, the larvae, and the eggs.

All content from Kiddle encyclopedia articles (including the article images and facts) can be freely used under Attribution-ShareAlike license, unless stated otherwise. Cite this article:
Army ant Facts for Kids. Kiddle Encyclopedia.