Elephant shrews, also called sengi, are any of 16 species of rat-sized African mammals named for their long, tapered, and flexible snout (proboscis). All have slim bodies, slender limbs, and very long hind legs and feet. Although they resemble shrews, they are not insectivores but constitute the mammalian order Macroscelidea. Long thought to be related to shrews, they are actually more closely related to elephants than to shrews although this was not known or even widely believed until the 1990s. 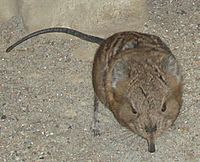 Elephant shrews are small, quadrupedal, insectivorous mammals resembling rodents or opossums, with scaly tails, elongated snouts, and rather long legs for their size, which are used to move in a hopping fashion like rabbits. They vary in size from about 10 cm to almost 30 cm, from just under 50 g to over 500 g. The short-eared elephant shrew has an average size of 150 mm (5.9 in). Although the size of the trunk varies among species, all are able to twist it about in search of food. Their lifespans are about two and a half to four years in the wild. They have large canine teeth, and also high-crowned cheek teeth similar to those of ungulates.

Although mostly diurnal and very active, they are difficult to trap and very seldom seen; elephant shrews are wary, well camouflaged, and adept at dashing away from threats. Several species make a series of cleared pathways through the undergrowth and spend their day patrolling them for insect life. If disturbed, the pathway provides an obstacle-free escape route.

Elephant shrews are not highly social animals, but many live in monogamous pairs, which share and defend their home territory, marked using scent glands. Rhynchocyon species also dig small conical holes in the soil, bandicoot-style, but others may make use of natural crevices, or make leaf nests.

Short-eared elephant shrews inhabit the dry steppes and stone deserts of southwestern Africa. They can even be found in the Namib Desert, one of the driest regions of the earth. Females drive away other females, while males try to ward off other males. Although they live in pairs, the partners do not care much for each other and their sole purpose of even associating with the opposite sex is for reproduction. Social behaviors are not very common and they even have separate nests. The one or two young are well developed at birth; they are able to run within a few hours.

Elephant shrews mainly eat insects, spiders, centipedes, millipedes, and earthworms. An elephant shrew uses its nose to find prey and uses its tongue to flick small food into its mouth, much like an anteater. Eating large prey can pose a challenge; an elephant shrew struggling with an earthworm must first pin its prey to the ground with a forefoot. Then, turning its head to one side, it chews pieces off with its cheek teeth, much like a dog chewing a bone. This is a sloppy process, and many small pieces of worm drop to the ground; these are simply flicked up with the tongue. Some elephant shrews also feed on small amounts of plant matter, especially new leaves, seeds, and small fruits.

A number of fossil species are known, all from Africa. They were separate from the similar-appearing order Leptictida. A considerable diversification of macroscelids occurred in the Paleogene Era. Some, such as Myohyrax, were so similar to hyraxes that they were initially included with that group, while others, such as Mylomygale, were relatively rodent-like. These unusual forms all died out by the Pleistocene. Although macroscelids have been classified with many groups, often on the basis of superficial characteristics, considerable morphological and molecular evidence now indicates placing them within Afrotheria, probably close to the base of Paenungulata.

All content from Kiddle encyclopedia articles (including the article images and facts) can be freely used under Attribution-ShareAlike license, unless stated otherwise. Cite this article:
Elephant shrew Facts for Kids. Kiddle Encyclopedia.