Hyrax also called dassie is any of four species of fairly small, thickset, herbivorous mammals in the order Hyracoidea, any of six species of small hoofed mammal (ungulates) native to Africa and extreme southwestern Asia.

Hyraxes are well-furred rotund creatures with a short tail. Most measure between 30–70 cm long and weigh between 2–5 kg. Hyraxes are mentioned in the Old Testament of the Bible and it is possible that the Hebrew word for hyrax is the source of the name of present-day Spain. Even though hyraxes are not native to Spain, rabbits are, and the theory states that early Hebrew explorers considered the rabbits to be a variety of hyrax. 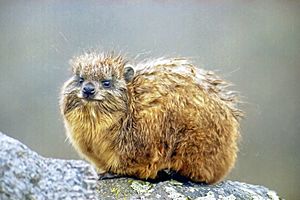 Hyraxes retain a number of primitive mammalian characteristics; in particular, they have poorly developed internal temperature regulation, for which they compensate by behavioural thermoregulation, such as huddling together and basking in the sun.

Unlike most other browsing and grazing animals, they do not use the incisors at the front of the jaw for slicing off leaves and grass; rather, they use the molar teeth at the side of the jaw. The two upper incisors are large and tusk-like, and grow continuously through life, similar to rodents. The four lower incisors are deeply grooved 'comb teeth'. A diastema occurs between the incisors and the cheek teeth. The dental formula for hyraxes is 1.0.4.32.0.4.3.

Although not ruminants, hyraxes have complex, multichambered stomachs that allow symbiotic bacteria to break down tough plant materials, but their overall ability to digest fibre is lower than that of the ungulates. Their mandibular motions (see video) are deceptively similar to chewing cud, but the hyrax is physically incapable of regurgitation as in the even-toed ungulates and the merycism of some of the macropods. This behaviour is referred to in a passage in the Bible which describes hyraxes as chewing the cud. This chewing behaviour may be a form of agonistic behaviour when the animal feels threatened.

Hyraxes inhabit rocky terrain across sub-Saharan Africa and the Middle East. Their feet have rubbery pads with numerous sweat glands, which may help the animal maintain its grip when quickly moving up steep, rocky surfaces. Hyraxes have stumpy toes with hoof-like nails; there are four toes on each front foot and three on each back foot. They also have efficient kidneys, retaining water so that they can better survive in arid environments.

Female hyraxes give birth to up to four young after a gestation period between seven and eight months, depending on the species. The young are weaned at one to five months of age, and reach sexual maturity at 16 to 17 months.

Hyraxes live in small family groups, with a single male that aggressively defends the territory from rivals. Where living space is abundant, the male may have sole access to multiple groups of females, each with their own range. The remaining males live solitary lives, often on the periphery of areas controlled by larger males, and mate only with younger females.

Hyraxes have highly charged myoglobin, which has been inferred to reflect an aquatic ancestry.

All content from Kiddle encyclopedia articles (including the article images and facts) can be freely used under Attribution-ShareAlike license, unless stated otherwise. Cite this article:
Hyrax Facts for Kids. Kiddle Encyclopedia.