Bandicoots are marsupials. There are about 20 species of bandicoots.

Bandicoots are omnivores. They eat bugs, earthworms, larvae, and spiders. Despite what they look like, they are not related to rats. They live in parts of Australia. They are nocturnal. Bandicoots are endangered species. For protection against foxes and wild cats, they retreat to their burrows for safety.

There are different species of bandicoot including: 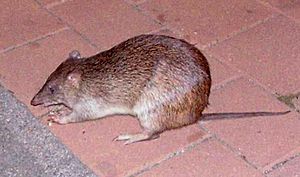 Marsupials, including bandicoots, are among the few groups of species that have a bifurcated penis.

The embryos of bandicoots, unlike other marsupials, form a placenta-like organ that connects them to the uterine wall. The function of this organ is probably to transfer nutrients from the mother; however the structure is small, compared to those of the Placentalia.

The character Crash Bandicoot is an eastern barred bandicoot the protaganist of the Sony Playstation game, chosen to compete as a mascot with Sega's Sonic the Hedgehog and Nintendo's Mario. Paleontologists have named an extinct bandicoot from the Miocene of Australia after the character, Crash bandicoot. Although somewhat unusual for the scientific community, the name was used in an entirely unaltered form, without attempting to return to Latin or Greek roots.

All content from Kiddle encyclopedia articles (including the article images and facts) can be freely used under Attribution-ShareAlike license, unless stated otherwise. Cite this article:
Bandicoot Facts for Kids. Kiddle Encyclopedia.