The eastern barred bandicoot (Perameles gunnii) is a nocturnal, rabbit-sized marsupial endemic to southeastern Australia, being native to the island of Tasmania and mainland Victoria. It is one of three surviving bandicoot species in the genus Perameles. It is distinguishable from its partially-sympatric congener – the long-nosed bandicoot – via three or four dark horizontal bars found on its rump. It is the only species of bandicoot found on Tasmania, where it is relatively abundant. The mainland population in Victoria is struggling and is subject to ongoing conservation endeavors. This species is the basis for the popular video game character Crash Bandicoot.

The eastern barred bandicoot weighs less than 2 kg (4.4 lb) and has a short tail and three to four whitish bars across the rump. The Eastern barred bandicoot has two separated populations, one on the mainland of Australia and one on the island of Tasmania. The Tasmanian form is somewhat larger than the mainland form as the average adult mass is 750 g in Victoria and 1,000 g in Tasmania. It lives for just two to three years and is not gregarious. Males occupy large home ranges compared to females and only consort with females for mating.

This species is nocturnal. It emerges from its nest at dusk to forage for a variety of invertebrates including crickets, beetles and earthworms. During the day it rests in a grass-lined nest. When foraging, it uses its long nose to probe deep into the soil and then digs eagerly when it locates food. Females have 8 nipples and can produce a maximum of 5 young in one litter with an average of 2 to 3 young. Gestation lasts just 12 days—this is one of the shortest gestation periods of any mammal. Young are weaned at 55 days and emerged juveniles remain dependent upon the mother and forage with her until day 86. Given ideal conditions, females can have up to five litters per year although reproduction becomes depressed in summer and ceases altogether in times of drought.

The eastern barred bandicoot was once distributed across the Basalt Plains of south west Victoria, and in Tasmania. Due to predation by introduced foxes and cats, along with land-clearing for farming practices, the Victorian subspecies is critically endangered. Since 1989, eight reintroduction sites have been established across the bandicoot's former range. The conservation of Eastern barred bandicoots in Victoria now depends upon the success of captive breeding and reintroduction programs. Keys to this conservation plan include maintaining an insurance population in captivity, conducting research to improve breeding and reintroduction success and increasing community awareness and support for this rare marsupial.

A management plan, developed in 1987 and revised in 1989, recommended the first reintroduction of the eastern barred bandicoot in Victoria at Woodlands Historic Park, 20 km northwest of Melbourne. Animals were translocated from the last remaining free-ranging mainland population in Hamilton, Western Victoria to captive breeding facilities at Woodlands to establish a population in 1988. The captive-bred offspring formed the basis for reintroductions into the Nature Reserve, known as the Back Paddock, a 400-ha section of the park with a predator-resistant fence to keep out feral predators.

The Tasmanian subspecies (P. g. gunni) is vulnerable to extinction. This species is more widespread than its mainland cousin because Tasmania provides large areas of suitable habitat and because the island lacks the bandicoot's main predator, the red fox.

In the state of Victoria, a Recovery Team oversees actions aimed at conserving the Victorian subspecies. Representatives of government agencies, NGOs and private conservation groups collaborate to develop and implement actions to improve the species' outlook. Groups include Conservation Volunteers, Zoos Victoria, Parks Victoria www.parkweb.vic.gov.au, Mount Rothwell Biodiversity Interpretation Centre, University of Melbourne, Conservation Enterprises Unlimited, National Trust of Australia (Victoria) and Department of Sustainability and Environment. Volunteers are encouraged to participate in recovery efforts arranged by Conservation Volunteers as part of the Wild Futures program. An effective recovery tactic currently in use is the exclusion of invasive predators from populations of threatened eastern barred bandicoots through the extensive use of conservation fences. Non-native predator species that are fenced out from endangered populations include feral cats and red foxes. Another important feature of conservation fences are that they restrict the spread of infectious diseases among the few remaining animals.

The eastern barred bandicoot is most closely related to the other species of bandicoot in its genus, of which only two species are still extant today. These surviving relatives are the western barred bandicoot (Perameles bougainville) and the long-nosed bandicoot (Perameles nasuta). It is also closely related to the desert bandicoot of the same genus, but this species has become extinct. There are about 20 other bandicoots in the same family, Peramelidae. They share similar features of long pointed snouts, and small ears. The bandicoots are closely related to the bilbies, which share the same order, Peramelemorphia. These are all from the infraclass Marsupialia, shared of course with other species such as koalas and kangaroos, which means they diverged from the other placental mammals about 100 million years ago.

All the species of this order are native to Australia and New Guinea; however it is unclear how closely related this order is to the rest of the marsupials. The bandicoots have two features that suggest separate and quite opposite ideas of their evolution. They have three pairs of lower front incisors, which would usually suggest evolution from the order Dasyuromorphia, which consists of carnivorous marsupials; however, the bandicoot's middle two digits are syndactylous, meaning they are joined together except for the claw. This would suggest they share the common ancestor of the Diprotodontia which includes the kangaroos and koalas.

There are, of course, theories using these features to describe their evolution. The incisors could, in fact, be analogous features shared between the bandicoot and the order Dasyuromorphia. They share the same function, after all, and though they are structurally similar the incisors of the carnivorous marsupials are a lot sharper than the flatter versions in the Bandicoot. The Bandicoot may have evolved the third tooth separately. If this was the case, it would seem logical that the syndactyl feet were homologous features shared between the Bandicoots and the kangaroos, wombats, possums and other species. This would make sense as syndactyly is so rare it is unlikely that it would evolve twice in two separate populations. The feet of the bandicoot when compared to, say, the kangaroo are structurally quite similar. This similarity suggests that the bandicoots share a more recent ancestor with them.

Nevertheless, though this idea is more likely, simply because of the rarity of syndactyly, it is possible that syndactyly evolved in the two different populations, and that bandicoots are actually more closely related to species such as the Tasmanian devil and the numbat. This would mean the incisors were homologous features, structurally the same but with a slightly different function (as the carnivorous marsupials use them to rip through flesh), and the syndactyl hind feet are analogous features, as they are used for the same basic function but are not evidence of divergent evolution.

Current molecular evidence does not support or disprove any of these theories, or any other related theories that are not suggested here. It is not quite definitive where the bandicoot sits exactly in the tree of life, but whatever the case, it seems that the relationship between the bandicoots and bilbies with the other orders is a distant one. 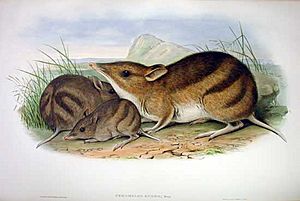 Illustration from Mammals of Australia, 1863

All content from Kiddle encyclopedia articles (including the article images and facts) can be freely used under Attribution-ShareAlike license, unless stated otherwise. Cite this article:
Eastern barred bandicoot Facts for Kids. Kiddle Encyclopedia.