The Tasmanian devil (Sarcophilus harrisii), sometimes called the Tassie devil in Australia is a meat eating mammal. It is also a marsupial, which means they have a small pouch to carry their babies. It is the largest meat eating marsupial in the world. They are nocturnal which means they sleep during the day and are awake during the night. They now live only in Tasmania, an island state of Australia.

The devil is the same size as a small dog with a wide head and a short tail. Male devils can weigh 12 kg and be 30 cm tall. It has black fur and makes a loud and very scary screeching noise. It will hunt other animals and also feed on dead animals. The devil has strong teeth and jaws and will eat all its prey even bones and fur.

The Tasmanian devil became extinct on the Australian mainland about 400 years before European settlement in 1788. They were hunted in Tasmania; in the 1930's the Van Dieman's Land Company offered 25 cents for each male and 35 cents for each female killed. In 1941 they became officially protected. 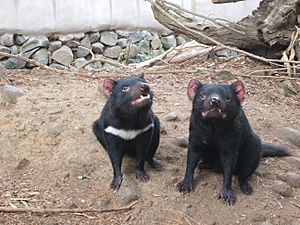 Two devils, one without any white markings. Around 16% of wild devils have no markings.

The Tasmanian devil is the largest surviving carnivorous marsupial.

It has a squat, thick build, with a large head and a tail which is about half its body length. Unusually for a marsupial, its forelegs are slightly longer than its hind legs, and devils can run up to 13 km/h (8.1 mph) for short distances.

The fur is usually black, often with irregular white patches on the chest and rump (although approximately 16% of wild devils do not have white patches). These markings suggest that the devil is most active at dawn and dusk.

Males are usually larger than females. 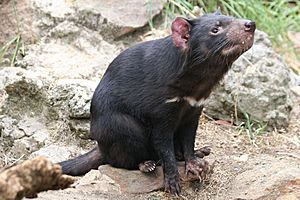 The Tasmanian devil's whiskers help it to locate prey in the dark.

Devils have five long toes on their forefeet, four pointing to the front and one coming out from the side, which gives the devil the ability to hold food. The hind feet have four toes, and the devils have non-retractable claws.

Devils are fully grown at two years of age, and few devils live longer than five years in the wild. Possibly the longest-lived Tasmanian devil recorded was Coolah, a male devil which lived in captivity for more than seven years. Born in January 1997 at the Cincinnati Zoo, Coolah died in May 2004 at the Fort Wayne Children's Zoo.

The devil stores body fat in its tail, and healthy devils have fat tails. An ano-genital scent gland at the base of its tail is used to mark the ground behind the animal with its strong, pungent scent.

The female's pouch opens backwards, and is present throughout its life, unlike some other dasyurids. 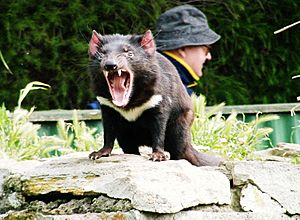 Tasmanian Devils have a powerful bite

The Tasmanian devil has the most powerful bite relative to body size of any living mammalian carnivore, exerting a force of 553 N (56.4 kgf). The jaw can open to 75–80 degrees, allowing the devil to generate the large amount of power to tear meat and crush bones—sufficient force to allow it to bite through thick metal wire.

The devil has long claws that allow it to dig burrows and seek food from underground easily. The teeth and claw strength allow the devil to attack wombats up to 30 kg (66 lb) in weight.

The devil has long Whiskers on its face and in clumps on the top of the head. These help the devil locate prey when foraging in the dark, and aid in detecting when other devils are close during feeding.

Hearing is its dominant sense, and it also has an excellent sense of smell, which has a range of 1 kilometre (0.6 mi). 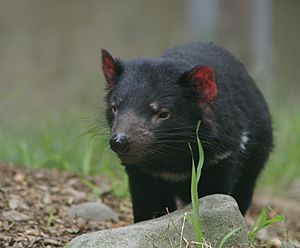 Devils are found in all habitats on the island of Tasmania, including the outskirts of urban areas, and are distributed throughout the Tasmanian mainland and on Robbins Island (which is connected to mainland Tasmania at low tide).

The "core habitat" of the devils is considered to be within the "low to moderate annual rainfall zone of eastern and north-western Tasmania". Tasmanian devils particularly like dry sclerophyll forests and coastal woodlands. 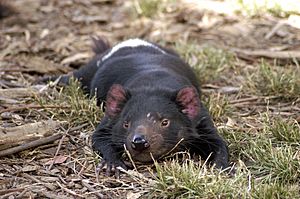 Although Tasmanian devils are nocturnal, they like to rest in the sun. Scarring from fighting is visible next to this devil's left eye

The Tasmanian devil is a nocturnal and crepuscular hunter, spending the days in dense bush or in a hole.

Young devils can climb trees, but this becomes more difficult as they grow larger. Adult devils may eat young devils if they are very hungry, so this climbing behaviour may be an adaptation to allow young devils to escape. Devils can also swim and have been observed crossing rivers that are 50 metres (160 ft) in width, including icy cold waterways, apparently enthusiastically.

Tasmanian devils do not form packs, but rather spend most of their time alone once weaned.

Devils use three or four dens regularly. Dens formerly owned by wombats are especially prized as maternity dens because of their security. Dense vegetation near creeks, thick grass tussocks, and caves are also used as dens. Adult devils use the same dens for life. It is believed that, as a secure den is highly prized, some may have been used for several centuries by generations of animals. Devils typically make circuits of their home range during their hunts. In areas near human habitation, they are known to steal clothes, blankets and pillows and take them for use in dens in wooden buildings.

The devil is a keystone species in the ecosystem of Tasmania. 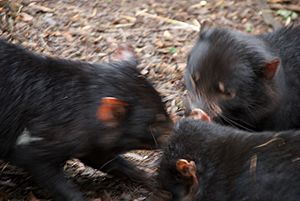 Tasmanian devils can take prey up to the size of a small kangaroo, but in practice they are opportunistic and eat carrion more often than they hunt live prey. Although the devil favours wombats because of the ease of predation and high fat content, it will eat all small native mammals such as bettong and potoroos, domestic mammals (including sheep), birds, fish, fruit, vegetable matter, insects, tadpoles, frogs and reptiles. Their diet is widely varied and depends on the food available. Before the extinction of the thylacine, the Tasmanian devil ate thylacine joeys left alone in dens when their parents were away. This may have helped to hasten the extinction of the thylacine, which also ate devils. They are known to hunt water rats by the sea and forage on dead fish that have been washed ashore.

Near human habitation, they can also steal shoes and chew on them, and eat the legs of otherwise robust sheep when they have slipped in wooden shearing sheds, leaving their legs dangling below. Other unusual matter observed in devil scats includes collars and tags of devoured animals, intact echidna spines, pencil, plastic and jeans. Devils can bite through metal traps, and tend to reserve their strong jaws for escaping captivity rather than breaking into food storage.

Despite their lack of extreme speed, there have been reports that devils can run at 25 km/h (16 mph) for 1.5 km (0.93 mi), and it has been conjectured that, before European immigration and the introduction of livestock, vehicles and roadkill, they would have had to chase other native animals at a reasonable pace to find food. It's been reported that they can average 10 km/h (6.2 mph) for "extended periods" on several nights per week, and that they run for long distances before sitting still for up to half an hour, something that has been interpreted as evidence of ambush predation. 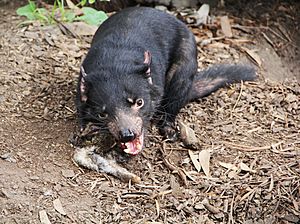 On average, devils eat about 15% of their body weight each day.

Tasmanian devils can eliminate all traces of a carcass of a smaller animal, devouring the bones and fur if desired.

Juvenile devils are sometimes known to climb trees; in addition to small vertebrates and invertebrates, juveniles climb trees to eat grubs and birds' eggs. Juveniles have also been observed climbing into nests and capturing birds.

Although they hunt alone, there have been unsubstantiated claims of communal hunting, where one devil drives prey out of its habitat and an accomplice attacks. Eating is a social event for the Tasmanian devil. This combination of a solitary animal that eats communally makes the devil unique among carnivores. Much of the noise attributed to the animal is a result of raucous communal eating, at which up to 12 individuals can gather, although groups of two to five are common; it can often be heard several kilometres away. This has been interpreted as notifications to colleagues to share in the meal, so that food is not wasted by rot and energy is saved. The amount of noise is correlated to the size of the carcass. 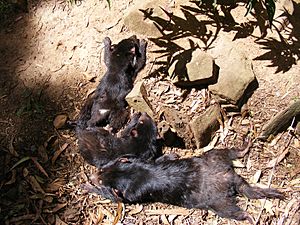 Females start to breed in their second year. Males fight over females in the breeding season.

Tasmanian devil young are variously called "pups", "joeys", or "imps".Once inside the pouch, they each remain attached to a nipple for the next 100 days.

Inside the pouch, the nourished young develop quickly. 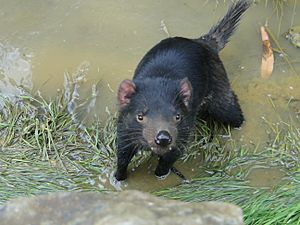 Their eyes open shortly after their fur coat develops—between 87 and 93 days—and their mouths can relax their hold of the nipple at 100 days.

They leave the pouch 105 days after birth, appearing as small copies of the parent and weighing around 200 grams (7.1 oz).

After being ejected, the devils stay outside the pouch, but they remain in the den for around another three months, first venturing outside the den between October and December before becoming independent in January.

The devils have a low genetic diversity which is consistent with a 'founder effect'. What this means is: a small number colonised Tasmania from Australia at some stage. So their genetic variety was much less than the parent population. Disease like the present may have happened before, and reduced the population to a small number. These events are called 'population bottlenecks'. A small population which carries less variation is always vulnerable to extinction, because none of the animals may be resistant to the infection.

Its genome was sequenced in 2010 by the Wellcome Trust Sanger Institute. There is some hope for their survival because, since 2005, three females have been found that are partially resistant to the disease. 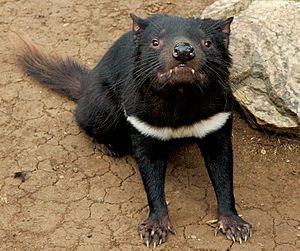 The devil is an iconic animal within Australia, and particularly associated with Tasmania. The animal is used as the emblem of the Tasmanian National Parks and Wildlife Service, and the former Tasmanian Australian rules football team which played in the Victorian Football League was known as the Devils. The Hobart Devils were once part of the National Basketball League. The devil has appeared on several commemorative coins in Australia over the years. Cascade Brewery in Tasmania sells a ginger beer with a Tasmanian devil on the label. In 2015, the Tasmanian devil was chosen as Tasmania's state emblem.

Tasmanian devils are popular with tourists.

With its unique personality, the Tasmanian devil has been the subject of numerous documentaries, fiction and non-fiction children's books. 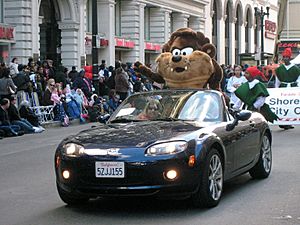 Warner Bros' Tasmanian Devil "Taz" at a parade in California

The Tasmanian devil is probably best known internationally as the inspiration for the Looney Tunes cartoon character the Tasmanian Devil, or "Taz" in 1954. Little known at the time, the loud hyperactive cartoon character has little in common with the real life animal. After a few shorts between 1957 and 1964, the character was retired until the 1990s, when he gained his own show, Taz-Mania, and again became popular. In 1997, a newspaper report noted that Warner Bros. had "trademarked the character and registered the name Tasmanian Devil", and that this trademark "was policed", including an eight-year legal case to allow a Tasmanian company to call a fishing lure "Tasmanian Devil".

All content from Kiddle encyclopedia articles (including the article images and facts) can be freely used under Attribution-ShareAlike license, unless stated otherwise. Cite this article:
Tasmanian devil Facts for Kids. Kiddle Encyclopedia.