Tasmania Parks and Wildlife Service is the government body responsible for protected areas of Tasmania on public land, such as national parks, historic sites and regional reserves. Historically it has also had responsibility for managing wildlife, including game.

The National Parks and Wildlife Service was set up on 1 November 1971 after controversy surrounding the proposal to flood Lake Pedder and the unsuccessful attempts to prevent the project going ahead. A Select Committee formed from the interested parties recommended the establishment of a professional park service to properly manage the natural environment in Tasmania. The service initially had a staff of 59. The National Parks and Wildlife Act 1970 had made provisions for the conservation of fauna and flora and the establishment and management of national parks. Mount William, Maria Island and Narawntapu National Parks were set up and Macquarie Island designated as a nature reserve. 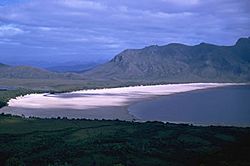 The creation of an Archaeology Section within the service followed the Aboriginal Relics Act 1975. In the following year Precipitous Bluff was incorporated into the Southwest National Park. Controversy in 1979 over the proposed Lower Gordon hydro-electric power scheme, which would have meant flooding the Franklin River led to the creation of the Franklin-Lower Gordon Wild Rivers National Park in 1981 (construction of the dam was stopped by a court ruling in 1983).

In the same year the Douglas-Apsley National Park, important for its dry sclerophyll forests, was established in the east of the state. The Tasmanian Wilderness World Heritage Area was expanded to include the Central Plateau Conservation Area. With other additions the World Heritage Area increased to 13,800 square kilometres (5,300 sq mi) (approximately 20% of Tasmania).

On 3 February 1993, the Department once again merged, this time with the Department of Environment and Land Management (DELM), with The Parks and Wildlife Service functioning as a separate division within the department. In 1993 the introduction of park fees allowed the service to fund projects aimed at visitors including visitor centres and official trails.

Some land previously managed by the service was transferred to Aboriginal Land Council of Tasmania and an Aboriginal Heritage Unit was created to provide training for Aboriginal community members, to allow them to advise on Aboriginal heritage management. 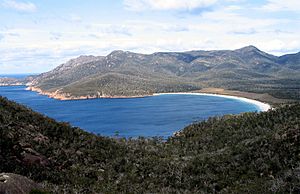 Wineglass Bay, part of Freycinet National Park which was expanded under the Regional Forestry Agreement

In 2002 three islands, Deal, Erith and Dover were declared as part of the Kent Group National Park and marine protected areas were created there and at Port Davey-Bathurst Harbour.

In 2007 the Tasmanian Coast Conservation Fund was established. Tour company operator Robert Pennicott founder of Bruny Island Cruises and Tasman Island Cruises came together with environmental group WILDCARE to establish the fund. While operating separately to the Tasmanian Parks and Wildlife Service, the fund is used to provide funding to the Parks and Wildlife Service to assist environmental protection and conservation projects in Tasmania's National Parks.

All content from Kiddle encyclopedia articles (including the article images and facts) can be freely used under Attribution-ShareAlike license, unless stated otherwise. Cite this article:
Tasmania Parks and Wildlife Service Facts for Kids. Kiddle Encyclopedia.