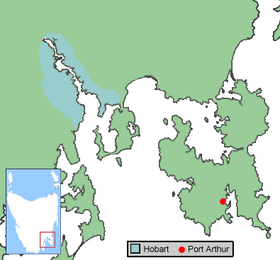 Port Arthur is a small town and former convict settlement on the Tasman Peninsula, in Tasmania, Australia. Port Arthur is one of Australia's most significant heritage areas and an open-air museum.

The site forms part of the Australian Convict Sites, a World Heritage property consisting of eleven remnant penal sites originally built within the British Empire during the 18th and 19th centuries on fertile Australian coastal strips. Collectively, these sites, including Port Arthur, now represent, "...the best surviving examples of large-scale convict transportation and the colonial expansion of European powers through the presence and labour of convicts."

Sadly in 1996 it was the scene of the worst mass murder event in post-colonial Australian history.

Port Arthur is located approximately 60 kilometres (37 mi) south east of the state capital, Hobart, on the Tasman Peninsula. The scenic drive from Hobart, via the Tasman Highway to Sorell and the Arthur Highway to Port Arthur, takes around 90 minutes and covers approximately 96 kilometres (60 mi). Transport from Hobart to the site is also available via bus or ferry, and various companies offer day tours from Hobart.

At the 2016 census, Port Arthur and the surrounding area had a population of 1049.

Port Arthur was named after George Arthur, the Lieutenant Governor of Van Diemen's Land. The settlement started as a timber station in 1830, but it is best known for being a penal colony.

From 1833 until 1853, it was the destination for the hardest of convicted British criminals, those who were secondary offenders having re-offended after their arrival in Australia. Rebellious personalities from other convict stations were also sent here, a quite undesirable punishment. In addition Port Arthur had some of the strictest security measures of the British penal system.

Port Arthur was one example of the "Separate Prison Typology" (sometimes known as the Model prison), which emerged from Jeremy Bentham’s theories and his panopticon. The prison was completed in 1853 but then extended in 1855. The layout of the prison was fairly symmetrical. It was a cross shape with exercise yards at each corner. The prisoner wings were each connected to the surveillance core of the Prison as well as the Chapel, in the Centre Hall. From this surveillance hub each wing could be clearly seen, although individual cells could not. This is how the Separate Prison at Port Arthur differed from the original theory of the Panopticon.

The Separate Prison System also signaled a shift from physical punishment to psychological punishment. It was thought that the hard corporal punishment, such as whippings, used in other penal stations only served to harden criminals, and did nothing to turn them from their immoral ways. For example, food was used to reward well-behaved prisoners and as punishment for troublemakers. As a reward, a prisoner could receive larger amounts of food or even luxury items such as tea, sugar and tobacco. As punishment, the prisoners would receive the bare minimum of bread and water. Under this system of punishment the "Silent System" was implemented in the building. Here prisoners were hooded and made to stay silent, this was supposed to allow time for the prisoner to reflect upon the actions which had brought him there. Many of the prisoners in the Separate Prison developed mental illness from the lack of light and sound. This was an unintended outcome although the asylum was built right next to the Separate Prison. In many ways Port Arthur was the model for many of the penal reform movement, despite shipping, housing and slave-labour use of convicts being as harsh, or worse, than others stations around the nation.

The peninsula on which Port Arthur is located is a naturally secure site by being surrounded by water (rumoured by the administration to be shark-infested). The 30m wide isthmus of Eaglehawk Neck that was the only connection to the mainland was fenced and guarded by soldiers, man traps and half-starved dogs.

Contact between visiting seamen and prisoners was barred. Ships had to check in their sails and oars upon landing to prevent any escapes. However, many attempts were made, and some were successful. Boats were seized and rowed or sailed long distances to freedom.

In 1836, a tramway was established between Taranna and a jetty in Long Bay, north of Port Arthur. The sole propulsion was convicts. One of the last remaining sections of the tramway can be viewed at the Federation Chocolate Factory at Taranna.

Smooth Island in Norfolk Bay was most likely used to grow fresh vegetables for the Port Arthur penal settlement.

Port Arthur was sold as an inescapable prison, much like the later Alcatraz Island in the United States. Some prisoners were not discouraged by this, and tried to escape. Martin Cash successfully escaped along with two others. One of the most infamous incidents, simply for its bizarreness, was the escape attempt of one George "Billy" Hunt. Hunt disguised himself using a kangaroo hide and tried to flee across the Neck, but the half-starved guards on duty tried to shoot him to supplement their meager rations. When he noticed them sighting him up, Hunt threw off his disguise and surrendered, receiving 150 lashes.

Port Arthur was also the destination for juvenile convicts, receiving many boys, some as young as nine. The boys were separated from the main convict population and kept on Point Puer, the British Empire's second boys' prison. Like the adults, the boys were used in hard labour such as stone cutting and construction. One of the buildings constructed was one of Australia's first non-denominational churches, built in a gothic style. Attendance of the weekly Sunday service was compulsory for the prison population. Critics of the new system noted that this and other measures seemed to have negligible impact on reformation.

Despite its reputation as a pioneering institution for the new, enlightened view of imprisonment, Port Arthur was still in reality as harsh and brutal as other penal settlements. Some critics might even suggest that its use of psychological punishment, compounded with no hope of escape, made it one of the worst. Some tales suggest that prisoners committed murder (an offence punishable by death) just to escape the desolation of life at the camp. The Island of the Dead was the destination for all who died inside the prison camps. Of the 1646 graves recorded to exist there, only 180, those of prison staff and military personnel, are marked. The prison closed in 1877.

Before Port Arthur was abandoned as a Prison in 1877, some people saw the potential tourist attraction. David Burn, who visited the Prison in 1842, was awed by the Peninsula’s beauty and believed that many would come to visit it. This opinion was not shared by all. For example, Anthony Trollope in 1872 declared that no man desired to see the "strange ruins" of Port Arthur.

After the Prison closed much of the property was put up for auction. However, most of the property was not sold until 1889. By this time, the area had become increasingly popular and the prison buildings were in decay. As the Hobart Mercury proclaimed, "the buildings themselves are fast going to decay, and in a few years will attract nobody; for they will be ruins without anything to make them worthy of respect, or even remembrance."

The decay was seen as something positive as the Tasmanian population wished to distance themselves from the dark image of Port Arthur. Those who bought Port Arthur property began tearing down the buildings, the destruction was furthered by the fires of 1895 and 1897 which destroyed the old prison house, and earth tremors. In place of the Prison Port Arthur, the town of Carnarvon was born. The town was named after the British Secretary of State and the population was said to be "refined and intellectual." The town brought in many visitors as they encouraged boating, fishing and shooting in the natural beauty of the Peninsula. They again wished to remove the negative connotation attached to the area.

Despite this wish, the haunting stories of Port Arthur prisoners and circulating ghost stories brought popularity to the remaining prison ruins. This was helped by the popular novels For the Term of His Natural Life (1874) by Marcus Clarke and The Broad Arrow (1859) by Caroline Leakey, which concerned themselves about convicts in Port Arthur. 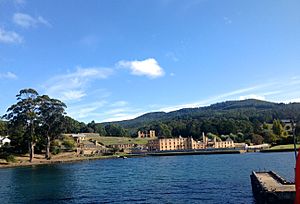 In 1927 tourism had grown to the point where the area's name was reverted to Port Arthur. 1916 saw the establishment of the Scenery Preservation Board (SPB) which took the management of Port Arthur out of the hands of the locals. By the 1970s the National Parks and Wildlife Service began managing the site.

In 1979 funding was received to preserve the site as a tourist destination, due to its historical significance. The "working" elements of the Port Arthur community such as the post office and municipal offices were moved to nearby Nubeena. Several magnificent sandstone structures, built by convicts working under hard labour conditions, were cleaned of ivy overgrowth and restored to a condition similar to their appearance in the 19th century. Buildings include the "Model Prison", the Guard Tower, the Church, and the remnants of the main penitentiary. The buildings are surrounded by lush green parkland.

The mass graves on The Isle of the Dead also attract visitors. The air about the small bush-covered island is described as possessing "melancholic" and "tranquil" qualities by visitors.

Point Puer, across the harbour from the main settlement, was the site of the first boys' reformatory in the British Empire. Boys sent there were given some basic education, and taught trade skills.

After entering the Historic Site, visitors can either survey the site for themselves, or participate in guided tours of the Site, a harbour cruise, tours to the Isle of the Dead and Point Puer and evening Historic Ghost Tours. There is also a museum, containing written records, tools, clothing and other curiosities from convict times, a Convict Gallery with displays of the various trades and work undertaken by convicts, and a research room where visitors can check up on any convict ancestors. Visitor facilities include two cafes, a bistro that operates each evening, gift shop, and other facilities.

Since 1987, the site has been managed by the Port Arthur Historic Site Management Authority, with conservation works funded by the Tasmanian Government and the admission fees paid by visitors. Volunteer groups have been working at the building sites of Point Puer to help researchers gain a better understanding of the history of the boys' prison.

To this day, Port Arthur is one of Australia’s best known historical sites, receiving over 250,000 visitors each year. The government puts significant money in the upkeep of site.

All content from Kiddle encyclopedia articles (including the article images and facts) can be freely used under Attribution-ShareAlike license, unless stated otherwise. Cite this article:
Port Arthur, Tasmania Facts for Kids. Kiddle Encyclopedia.