Kids Encyclopedia Facts
This page is about the state electorate. For the federal electorate, see Division of Lyons. 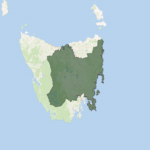 The electoral division of Lyons is one of the five electorates in the Tasmanian House of Assembly, it is the largest electorate covering most of central and eastern Tasmania. Lyons is named jointly in honor of Joseph Lyons, Prime Minister of Australia (1931–1939); Premier of Tasmania (1923–1928), and Joseph's wife, Dame Enid Lyons, the first woman elected to the Australian House of Representatives in 1943. The electorate shares its name and boundaries with the federal division of Lyons.

Lyons and the other House of Assembly electoral divisions are each represented by five members elected under the Hare-Clark electoral system.

Members for Lyons and Wilmot

All content from Kiddle encyclopedia articles (including the article images and facts) can be freely used under Attribution-ShareAlike license, unless stated otherwise. Cite this article:
Division of Lyons (state) Facts for Kids. Kiddle Encyclopedia.