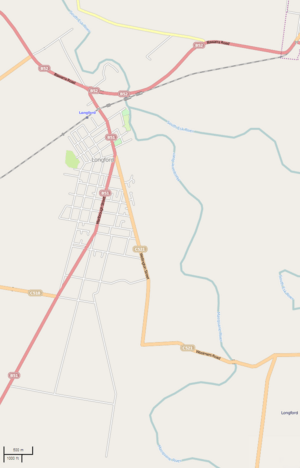 Longford is a town in the northern midlands of Tasmania, Australia. It lies 145 m above sea level at the convergence of the Macquarie River and the South Esk River, 21 km south of Launceston and a 15-minute drive from the airport. It is just south of the Illawarra Road, a road connecting the Bass and Midland Highways. It has a population of 4,266 (2006 census) and is part of the Northern Midlands Council area. The region is predominantly agricultural, noted for wool, dairy produce and stock breeding.

Aboriginal people of the Longford area

The Longford region was the traditional land of The Panninher (par-nin-her) clan of the North Midlands Nation. This clan was known as the Penny Royal Creek Tribe by colonials, named after the old European name for the Liffey River (aboriginal: Tellerpangger). The Panninher occupied land from Drys Bluff to the Tamar, Evandale and south to the Conara region. The Norfolk Plains region was the site of hunting and the boundary of the aboriginal road from the Liffey River valley to the Lake River Valley and thence to the Central Highlands.

In 1806 the first Europeans, Jacob Mountgarrett and Ensign Hugh Piper, passed through the area, and in the following year Lieutenant Thomas Laycock camped near the current site of the town during his overland journey from Launceston to Hobart.

Settlers started to arrive in 1807 as farmers were moved from Norfolk Island to Van Diemen's Land (the original name used by Europeans for Tasmania). Governor Macquarie granted land rights to the settlers, who originally called the area Norfolk Plains. The town, originally called Latour, grew up around the hotel (later known as the Longford Hotel) which was built in 1827 by Newman Williatt. In 1833 the town was renamed Longford, probably at the suggestion of the land commissioner Roderic O'Connor.

Prominent among the early settlers, the Archer family built a number of grand houses and estates in the area. Thomas Archer emigrated from England to Australia in 1811, and retired from government service in 1821 to develop his 2,000-acre (8.1 km2) estate. By 1825 he held 6,000 acres (24 km2) in the area and his success persuaded first his brother Joseph, then his brothers Willam and Edward and their father, to join him.

Together they farmed and developed the land, and built a number of homesteads which are among the finest in northern Tasmania: Woolmers Estate, Brickendon Estate (both on the Australian National Heritage List), Panshanger, Northbury, Fairfield, Cheshunt, Woodside, Palmerston and Saundridge. Six generations of Archers have lived in Woolmers, from 1817 to 1994; it is now owned by the Woolmers Foundation Inc and is open to the public.

Norfolk Plains Post Office opened on 1 June 1832 and was renamed Longford in 1856.

Adjacent to a 21st-century recreation ground is the remains of a dam. This dam, known as the Longford Mill Dam, was built in the 1840s by John Badcock to power a flour Mill at nearby Newry. 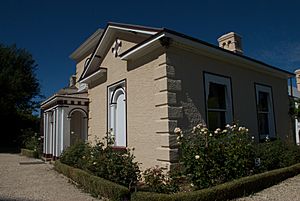 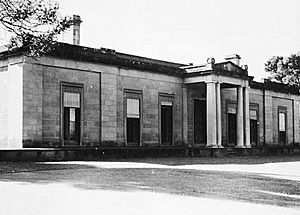 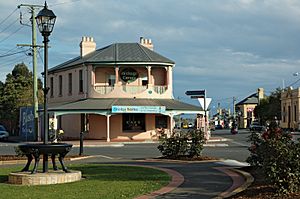 Heritage Corner, from the early 1830s 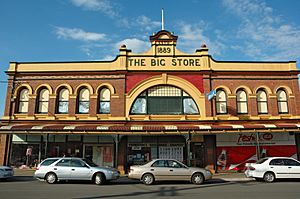 Longford district has many buildings included on the Tasmanian Heritage Register. Many significant historic buildings were constructed between 1830 and 1850, including:

Longford has a Service Tasmania shop, supermarkets, a bakery, a butcher's shop, two banks, a Post Office, antique shops, hotels, cafés, take-aways, hairdressers and service stations. A kindergarten and large primary school provide education for younger children; secondary students travel to the District High School in Cressy or to one of the schools in Launceston.

The town has a sports centre and a bowls club. Two local bus companies provide transport to school and to Launceston. Longford public library is part of the State Library of Tasmania's statewide public library network and is open every weekday.

Healthcare is provided by local doctors and dentists. Toosey Memorial Hospital provided private healthcare from the 1920s and became a public hospital in 1950. However, in 1990 it became a residential care centre for elderly people, and the nearest hospital is now in Launceston.

In the 2006 census, the most common industries of employment for Longford residents were:

Swift Australia (Southern) Pty Limited runs Longford abattoir, and is one of the state's largest regional employers. The plant processes 450 beef and 1500 smallstock per day and employs 460. Tasmania is the only Australian state that has banned the use of Hormonal Growth Promotants (HGPs) in cattle, so the plant guarantees its products are free of HGP.

Selborne Biological Services runs a biotechnology manufacturing facility in Longford, producing bovine serum and other blood products such as polyclonal antisera and protein fractions, destined for the biotech, pharmaceutical, veterinary, and diagnostics industries. They take advantage of the fact that Tasmania is free of BSE and scrapie.

Koppers Inc has a wood treatment plant in Longford. The company produces treated wood poles, piling timbers and other timber for outdoor use.

The Longford Racecourse is the oldest continuously operating racecourse in Australia. Longford is home to many horse studs and training facilities, and the Longford races are held annually on New Year's Day, with thoroughbred horse racing and the Elders Webster Longford Cup.

The annual Longford Show was first held in 1858 and is one of the longest running rural shows in Australia. Held in October, it attracts between 7000 and 8000 people. It includes equestrian events, poultry and dog shows, chopping and tree felling, sheep and fleeces, rides and games, as well as displays of artwork from local schools.

Longford has a popular golf course south of the town, with eleven holes, seven of which have alternate tees.

Woodstock Lagoon Wildlife Sanctuary is a natural wetland area which is a nesting and breeding sanctuary for waterfowl. Its total area is around 160 ha. Jointly owned by Dr Tatiana Petrovsky and brothers Bill and Jamie Cox, the area is now permanently protected under Conservation Covenant under the Protected Areas on Private Land program. Not only are waterfowl and swans provided with a habitat, but numerous other species, including endangered species like the green and gold frog, are thriving there.

All content from Kiddle encyclopedia articles (including the article images and facts) can be freely used under Attribution-ShareAlike license, unless stated otherwise. Cite this article:
Longford, Tasmania Facts for Kids. Kiddle Encyclopedia.