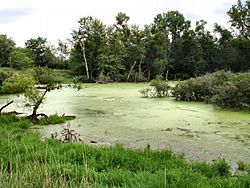 In physical geography, a wetland is an environment that combines the properties of land and water. Wetlands are a distinct kind of ecosystem.

The combination of wet and dry areas means that many more different kinds of plants, animals and insects may live in a wetland than compared to other types of habitat. Because of this great biodiversity, several important wetlands are among the Global 200 ecoregions that the World Wide Fund for Nature listed for conservation to try to get people to protect them.

All content from Kiddle encyclopedia articles (including the article images and facts) can be freely used under Attribution-ShareAlike license, unless stated otherwise. Cite this article:
Wetland Facts for Kids. Kiddle Encyclopedia.