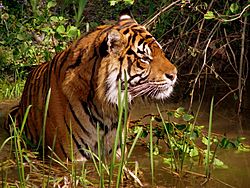 Wildlife originally meant non-domesticated animal species. It now includes all plants, fungi and other organisms which grow or live wild in an area without being introduced by humans. Domesticating wild plant and animal species for human benefit has occurred many times all over the planet. It has had a big effect on the environment, both positive and negative.

Wildlife can be found in all ecosystems. Deserts, forests, rain forests, plains, grasslands, and other areas including the most developed urban sites, all have distinct forms of wildlife. Most scientists agree that wildlife around is affected by human activities. A garden is not a natural habitat, but it is full of genuine wildlife.

All content from Kiddle encyclopedia articles (including the article images and facts) can be freely used under Attribution-ShareAlike license, unless stated otherwise. Cite this article:
Wildlife Facts for Kids. Kiddle Encyclopedia.