Chiang Mai sometimes written as "Chiengmai" or "Chiangmai", is the largest and most culturally significant city in northern Thailand. It is the capital of Chiang Mai Province. It is located 700 km (435 mi) north of Bangkok, among the highest mountains in the country. The city is along the Ping River, a major tributary of the Chao Phraya River. Chiang Mai means "new city" and was so-named because it was the new capital, founded in 1296, succeeding Chiang Rai (founded 1262) in the capital of the Lanna kingdom.

In recent years, Chiang Mai has become an increasingly modern city and has been attracting over 5 million visitors each year, of which between 1.4 million and 2 million are foreign tourists. Chiang Mai is one of three Thai cities contending to host the World Expo 2020. It has also recently positioned itself to become a Creative City and is considering to apply for Creative City Status with UNESCO. Chiang Mai is the only tourist destination in Thailand to have made it in to the 2012 list of "25 Best Destinations in the World" of the popular travel website TripAdvisor, standing in place 24.

Chiang Mai's historic importance is derived from its close proximity to the Ping river and major trading routes. 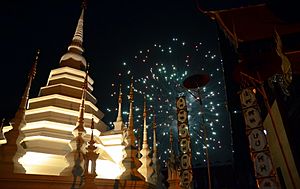 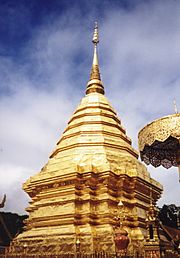 Chiang Mai has over 300 Buddhist temples (called "wat" in Thai). These include: 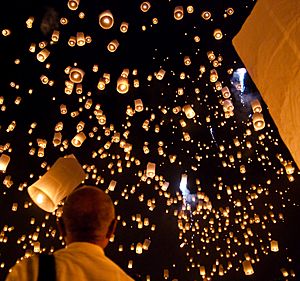 Thousands of Khom Fai in Mae Jo during Loi Kratong 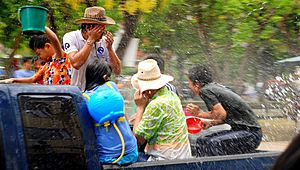 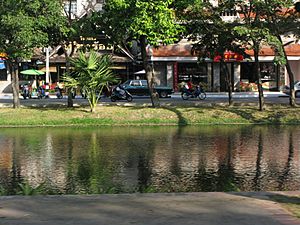 A street in Chiang Mai

All content from Kiddle encyclopedia articles (including the article images and facts) can be freely used under Attribution-ShareAlike license, unless stated otherwise. Cite this article:
Chiang Mai Facts for Kids. Kiddle Encyclopedia.