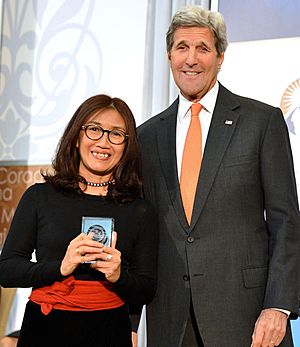 Rodjaraeg Wattanapanit with U.S. Secretary of State John Kerry in 2016

Rodjaraeg Wattanapanit is a bookstore owner from Thailand. She also helped start Creating Awareness for Enhanced Democracy (CAFÉ Democracy), an organization for political ideas. In 2016 she received the International Women of Courage Award.

Wattanapanit graduated from Payap University in Chiang Mai, Thailand. She raised money for conservation of forests. She worked for Community Forest Support group, a non-governmental organization. When Wattanapanit recieved the award in 2016, she was 49 years old.

In October 2011, Wattanapanit started the bookstore Book Re:public with Pinkaew Luangaramsri, an anthropology scholar from Chiang Mai University. After the May 2014 coup, the government closed her bookshop. They took her to military camps twice. They wanted her to sign an agreement not to work for political activities. The first time, they took her to Kawila Army Camp in Chiang Mai. The second time it was the Army Central Command.

After one year, she opened the bookshop again. The shop is a place for neighbors to meet and talk about social and political problems.

All content from Kiddle encyclopedia articles (including the article images and facts) can be freely used under Attribution-ShareAlike license, unless stated otherwise. Cite this article:
Rodjaraeg Wattanapanit Facts for Kids. Kiddle Encyclopedia.