Kids Encyclopedia Facts
This page is about the church as a building. For the Church as a Christian organization, see Christian Church. For other uses of the word "church", see Church (disambiguation). 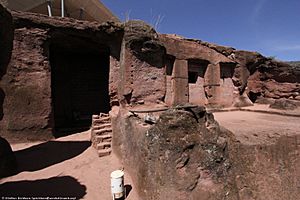 A church in Ethiopia

A church is a building that was constructed to allow people to meet to worship together. These people are usually Christians, or influenced by Christianity. Some other religious groups also call their religious buildings churches.

Depending on the number of people that are in a community, the churches come in different sizes. Small churches are called chapels. The churches in a particular geographical area form a group called the diocese. Each diocese has a cathedral. In most cases, the cathedral is a very big church. Cathedrals are the seat of bishops. 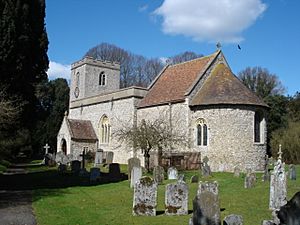 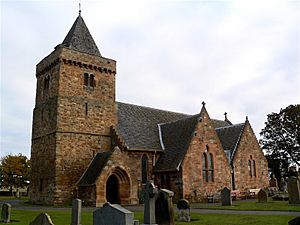 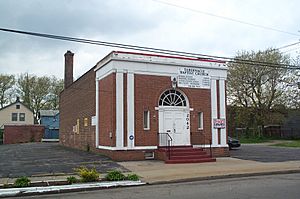 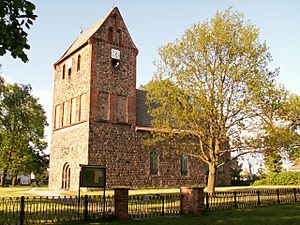 Lindenberg Church, near Berlin, Germany is a 13th century church. 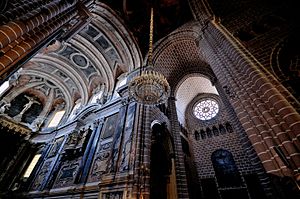 Inside the transept of the Cathedral of Évora, Portugal 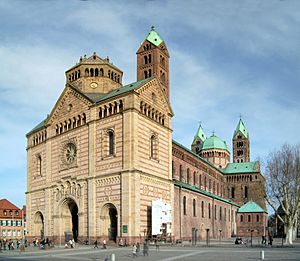 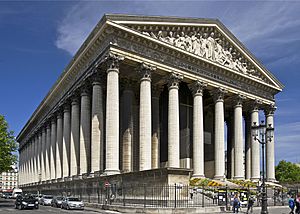 La Madeleine, Paris is one of the main sights in Paris, France

After the death of the Roman emperor Constantine in 337 A.D. Christians were allowed to have buildings to worship in. These first churches were built on a similar plan to Roman basilicas. This plan was later used for the fine Gothic cathedrals and churches that were built at the end of the Middle Ages.

The parts of a church

There are several parts in the architecture of a church. Not all churches will have all these parts:

Traditionally the nave has long benches for the congregation to sit on. These are called pews. Some churches may now have replaced their pews with chairs so that they can be moved about for different occasions. At the front of the nave is the pulpit where the priest preaches (these talks are called “sermons”). There is also a lectern (like a large music stand) from where the lessons (the Bible readings) are read.

If there are aisles along the side of the nave there will be pillars which hold up the roof. In large churches or cathedrals there may be a row of little arches along the top of these pillars. This is called the triforium. Over the triforium is the clerestory which is a row of windows high up in the church wall.

The chancel is the most holy part of the church, and this is why it is often separated from the nave by a screen which can be made of wood or stone, or occasionally iron. The congregation can see through the screen. On the top of the screen there may be a cross. This is called a rood (pronounce like “rude”) screen. Priests used to climb up a staircase to the top of the rood screen to read the epistle and the gospel. Sometimes people sang from there.

Inside the chancel are the benches where the choir sit. These are called choir stalls. They are on both sides. The two sides of the choir sit facing one another. The choir members who sit on the left (north side) are called “cantoris” (the side where the “cantor” sits) and those on the right (south side) are called “decani” (the side where the deacon sits). In some large churches or cathedrals the seats for the priests tip up. The top of these seats, when they are tipped up, are called misericords (from the Latin word for “mercy”). This is because the priests or monks were able to lean against them when they got tired if they had to stand up for a long time.

Sometimes there are holes in the walls of the screen so that the congregation can see through. These are called squints. If there is a recess in the wall it is called an aumbry. It is a cupboard for communion wine and bread that have been consecrated by a priest.

The altar may be right at the east end of the church, but in larger churches or cathedrals it is often much farther forward. In that case the very east end is called an apse. Sometimes it is a separate chapel called the “Lady Chapel”.

Churches through the ages

The design of churches changed a lot during the course of history. Often churches were made bigger. When this happened there may be a mixture of architectural styles. These styles vary a lot in different countries.

In English churches there were several different periods of architecture:

Modern churches often do not have the traditional cross-shape. It is difficult for the congregation to see and hear what is happening in the chancel. Modern churches bring the congregation, choir and priests in closer touch. An example is the round design for the Church of Christ the Cornerstone in Milton Keynes. Modern churches are often simpler but with a warmer character than the Gothic churches. Many have beautiful mosaic glass windows. Coventry Cathedral is a famous example of a modern church building.

All content from Kiddle encyclopedia articles (including the article images and facts) can be freely used under Attribution-ShareAlike license, unless stated otherwise. Cite this article:
Church (building) Facts for Kids. Kiddle Encyclopedia.