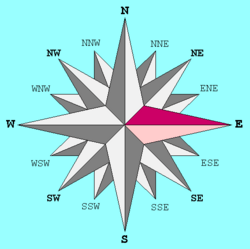 Points of the compass with east highlighted

East is one of the 4 main directions on a compass (called cardinal directions). East is normally to the right on most maps. For example: Japan is east of China, which is itself east of Pakistan. When “The East” is described: it usually refers to the countries of Asia (especially from Pakistan eastwards like China and India). The sun and moon are also seen to rise in the east.

All content from Kiddle encyclopedia articles (including the article images and facts) can be freely used under Attribution-ShareAlike license, unless stated otherwise. Cite this article:
East Facts for Kids. Kiddle Encyclopedia.