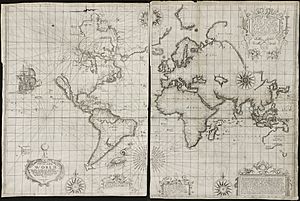 A map is an image of an area, usually of the Earth or part of the Earth. A map is different from an aerial photograph because it includes interpretation.

The word "map" can also be used to talk about a chart or drawing that shows relationships between ideas, people, events, or anything else you can think about. This is why web developers call a list of web pages on a web site a site map.

People who make maps are cartographers.

Many maps today are made using GIS computer systems. These are database systems that are organized by location instead of named records.

If a map is on a piece of paper or a computer screen, it has to be projected. This is because the Earth is round and paper and screens are flat. There are a lot of ways that use mathematics to make projections. The only kind of map of the Earth that is not projected is one drawn on a sphere. This is called a globe. 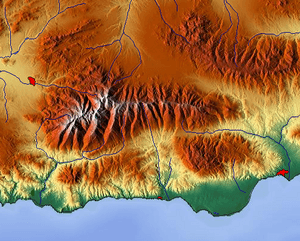 All content from Kiddle encyclopedia articles (including the article images and facts) can be freely used under Attribution-ShareAlike license, unless stated otherwise. Cite this article:
Map Facts for Kids. Kiddle Encyclopedia.