Amsterdam is the capital and largest city in the European country of the Netherlands. It is famous for its canals and dikes. Unlike most other countries, the national government does not meet in Amsterdam, but in The Hague.

As of 2016, about 838,000 people were living in Amsterdam. There are two universities (the University of Amsterdam and the Free University Amsterdam) and an international airport "Schiphol Airport" there. About 2.2 million people live in the metropolitan area. The city of Amsterdam is the world's most multi-cultural city. It has people from 175 different countries living there.

A dam was built in 13th century on the river Amstel (that's why the city is called Amsterdam). The old harbor of the city, Damrak, is now one of the busiest streets in the city. In 1275, Floris V, count of Holland and Zeeland gave the people of Amsterdam some more freedom. Soon after receiving its city rights in the early 1300s, Amsterdam became a major trading port, with a successful trading route to the Baltic Sea. The city grew quickly during the 15th century. Because Amsterdam lies in swamp area, the builders of the city had to dig canals and use the ground they dug to make the land higher. Homes were built on wooden poles, and the canals served as a sewer.

The city was one of the first cities in Western Europe to be somewhat democratic: wealthy citizens chose the leaders of the city. Amsterdam declared war on the Spanish in 1578, during the Eighty Years' War. When the city of Antwerp fell to the Spanish in 1585, many people of Antwerp fled to Amsterdam. Antwerp was also a major trading city, and when its people moved to Amsterdam, they took their trading networks with them. This made Amsterdam an even more important trading city. During what is called the "Dutch Golden Age," the number of people living in Amsterdam rose from less than 30,000 in 1570 to over 100,000 in 1622. That number would even rise to 200,000 near the end of the 17th century, making the city a very large city for its time (only London and Paris also had that many people). In the 18th century, the number of people living in Amsterdam fell back to 140,000, ending the Golden Age.

The first trains and trams in Amsterdam were built during the 19th century. The first train ran from Amsterdam to Haarlem in 1839. The number of people was rising, with about 250,000 living in Amsterdam in 1850 and more than 500,000 in 1900. Amsterdam was a heavily industrialized city by then. Before the Second World War, there were about 140,000 Jews living in Amsterdam. Most of them did not survive the war. After the war, Amsterdam became a center of tolerance and culture; to be different is normal in Amsterdam. It is expected that Amsterdam to a population of almost 900,000 by 2025. The metropolitan area will most likely hold almost 2.5 million people by then. 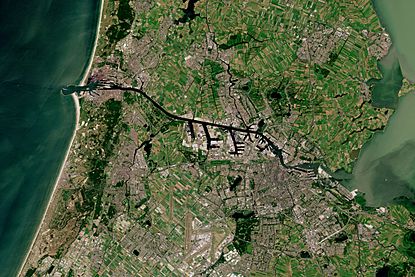 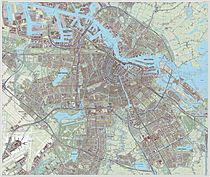 Topographic map of Amsterdam and its surrounding municipalities, 2014 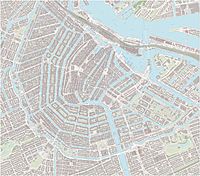 Large-scale map of the city center of Amsterdam, including sightseeing markers, as of April 2017[update]

Amsterdam is located in the Western Netherlands, in the province of North Holland, whose capital is not Amsterdam, but rather Haarlem. The river Amstel ends in the city center and connects to a large number of canals that eventually end in the IJ. Amsterdam is about 2 m (6.6 ft) below sea level. The land that surrounds it is flat as it is formed of large polders. A man-made forest, Amsterdamse Bos, is in the southwest. Amsterdam is connected to the North Sea through the long North Sea Canal.

Amsterdam has mostly man-made buildings, as does the Amsterdam metropolitan area surrounding the city. Making up 219.4 km2 (84.7 sq mi) of land, the city has 13,565 inhabitants per square mile. Parks and nature reserves make up 12% of Amsterdam's land area.

Amsterdam has more than 100 km (60 mi) of canals. Most of the canals can be traveled on by boat. The city's three main canals are the Prinsengracht, Herengracht, and Keizersgracht.

During the Middle Ages, Amsterdam was surrounded by a moat, called the Singel, which now forms the innermost ring in the city and gives the city center a horseshoe shape. Amsterdam is also served by a seaport. It has been compared with Venice because it is divided into about 90 islands, which are joined by more than 1,200 bridges. 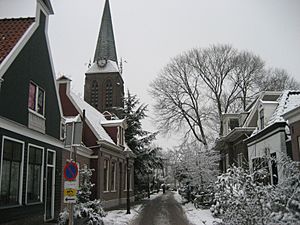 Amsterdam has an oceanic climate (Köppen Cfb) because it is located close to the North Sea to the west. While winters are cool and summers warm, temperatures vary year by year. There can occasionally be cold snowy winters and hot humid summers. 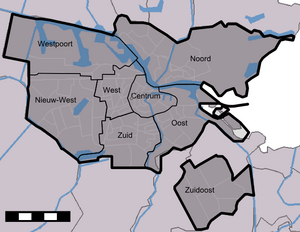 View of the city center looking southwest from the Oosterdokskade 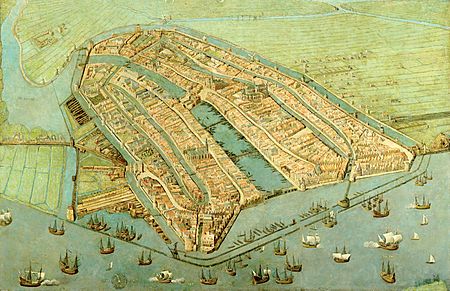 A 1538 painting by Cornelis Anthonisz showing a bird's-eye view of Amsterdam. The famous Grachtengordel had not yet been established.

Amsterdam fans out south from the Amsterdam Centraal station and Damrak, the main street off the station. The oldest area of the town is known as De Wallen (English: "The Quays"). It lies to the east of Damrak. To the south of De Wallen is the old Jewish quarter of Waterlooplein.

The Medieval and Colonial age canals of Amsterdam, known as grachten, or Grachtengordel, surround the center of the city where homes have interesting gables. Beyond the Grachtengordel are the former working-class areas of Jordaan and de Pijp. The Museumplein, with the city's major museums; the Vondelpark, a 19th-century park named after the Dutch writer Joost van den Vondel; and the Plantage neighborhood, with the zoo, are also located outside the Grachtengordel.

Several parts of the city and the surrounding urban area are polders. Thie names can be recognized by the suffix -meer which means lake, as in Aalsmeer, Bijlmermeer, Haarlemmermeer, and Watergraafsmeer. 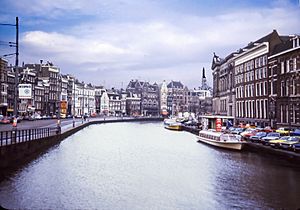 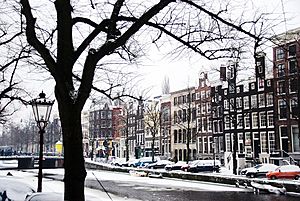 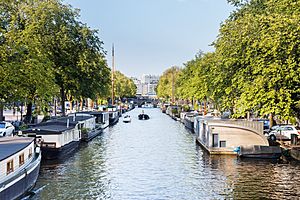 The Amsterdam canal system is the result of conscious city planning. In the early 17th century, when immigration was high, a detailed plan was created for the canals. Four layered (almost like a rainbow) half-circles of canals were built with their ends at the IJ bay.

The canals served for defense, water management, and transport. There were a moat and earthen dikes with gates at transit points.

Construction started in 1613 and moved from west to east like a gigantic windshield wiper. The canal construction in the southern sector was completed by 1656. After the canal was completed, residential buildings (buildings where people live) were slowly built. The eastern part of the canal plan, covering the area between the Amstel river and the IJ bay, has never been built. In the following centuries, the land was used for parks, senior citizens' homes, theatres, other public facilities, and waterways without much planning. Over the years, several canals have been filled in, becoming streets or squares, such as the Nieuwezijds Voorburgwal and the Spui. 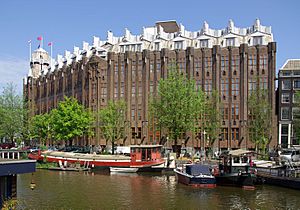 The Scheepvaarthuis, by architects Johan van der Mey, Michel de Klerk, Piet Kramer is characteristic of the architecture of the Amsterdam School.

Amsterdam has a rich architectural history. The oldest building in Amsterdam is the Oude Kerk (English: Old Church), in the middle of the Wallen, dating to 1306. The oldest wooden building is Het Houten Huys at the Begijnhof. It was built around 1425 and is one of only two wooden buildings that still exist. It is also one of the few examples of Gothic architecture in Amsterdam. The oldest stone building of the Netherlands, the Moriaan, is built in 's-Hertogenbosch.

In the 16th century, wooden buildings were destroyed and replaced with brick ones. During this period, many buildings were built in the architectural style of the Renaissance.

In the 17th century, baroque architecture became very popular, as it was in other places in Europe. This was around the time of Amsterdam's Golden Age. The leading architects of this style in Amsterdam were Jacob van Campen, Philips Vingboons, and Daniel Stalpaert.

Begijnhof is one of the oldest hofjes in Amsterdam. 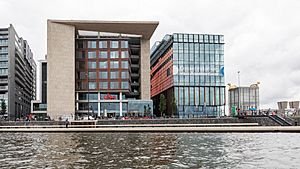 The Openbare Bibliotheek Amsterdam and Conservatorium van Amsterdam, two examples of 21st-century architecture in the center of the city

Around 1815, architects stopped using the baroque style and started building in different neo-styles. Most Gothic-style buildings were built during this time. They are said to be built in a neo-gothic style.

At the end of the 19th century, the Jugendstil or Art Nouveau style became popular and many new buildings were built in this architectural style. Since Amsterdam expanded quickly during this period, new buildings near the city center were also built in this style. The outside of the buildings designed at Amsterdamse School are unique: they are quite ornate, with oddly shaped windows and doors.

Most historic buildings in the city center and nearby are houses, such as the famous merchants' houses lining the canals.

Bicycles and public transportation are used within the city of Amsterdam. Large freeways only exist around the city, ending at the A10 Ringroad. Driving a car through the city center is discouraged. The government is trying to get people to use cars less. 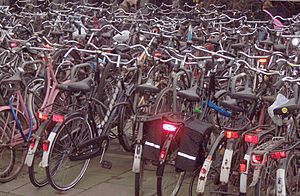 Many bikes parked in Amsterdam 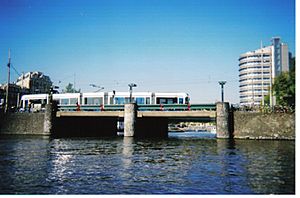 Amsterdam is known as one of the most bicycle-friendly cities in the world and is a center of bicycle culture. 38% of all journeys in the city are made by bicycle. Most main streets have bike paths. Bike racks are seen almost everywhere throughout the city. Amsterdam contains about 1,000,000 bicycles. Each year, about 100,000 of them are stolen, and 25,000 end up in the canals.

Amsterdam has a large collection of canals. There are over 150 of these waterways that crisscross the city and its surroundings, dividing the city of Amsterdam into approximately 90 mini islands. This group of islands is joined together by over 1,200 bridges. For many centuries, these canals or waterways were used as the main transportation routes in Amsterdam. Everything ranging from water to coal, from food to spices used to be transported over these canals. Today the canals are only used by smaller barges, pleasure boats, and canal tour boats. DHL is the exception: it has its own DHL parcel boats that deliver packages across town using the old waterways.

Transportation by car is discouraged by the local government with expensive parking fees. Many streets are closed off for cars in the city center. The A10 Ringroad surrounding the city connects Amsterdam with the Dutch national network of freeways.

There are 10 train stations in Amsterdam. See Amsterdam railway stations for more information. 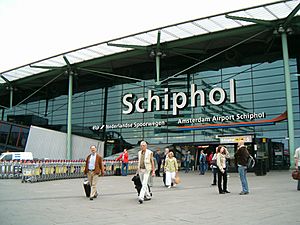 Amsterdam Schiphol Airport is less than 20 minutes by train from Amsterdam Central Station. It is the biggest airport in the Netherlands, the 3rd largest in Europe, and the fourteenth largest in the world. It handles about 68 million passengers a year (2017). It is also home base to KLM, part of Air France-KLM since 2004.

The nearby port city of IJmuiden is a popular travel choice for those wishing to visit Amsterdam. DFDS Seaways is one of the main companies to operate in and out of IJmuiden.

All content from Kiddle encyclopedia articles (including the article images and facts) can be freely used under Attribution-ShareAlike license, unless stated otherwise. Cite this article:
Amsterdam Facts for Kids. Kiddle Encyclopedia.