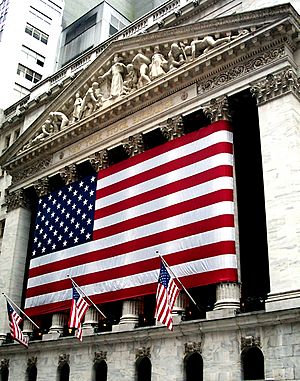 The New York Stock Exchange, one of the biggest stock exchanges in the United States.

The most important stock exchanges in the world include:

On October 29, 1929, the American stock market crashed on what is known as Black Tuesday. A "crash" means that the prices of stock were lowered greatly, and no one wanted to buy it. Instead, they sold the stock for cheap prices. Also, banks were trying to buy stock with people's money (stored inside the bank), so the banks ran out of money too. Because people could not get money back from banks, only a few people could afford the cost of living. This was the start of the Great Depression.

All content from Kiddle encyclopedia articles (including the article images and facts) can be freely used under Attribution-ShareAlike license, unless stated otherwise. Cite this article:
Stock exchange Facts for Kids. Kiddle Encyclopedia.