October (Oct.) is the tenth month of the year in the Gregorian calendar, coming between September and November. It has 31 days. The name comes from the Latin octo for "eight". It was the eighth month of the year before January and February were added to the beginning of the year.

October is an Autumn (Fall) month in the Northern Hemisphere, as shown here in Vermont.

October is the month of the Rosary devotion. 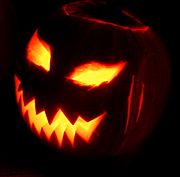 Halloween is celebrated on October 31. 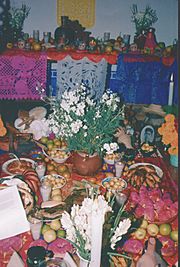 Offering on Day of the Dead in Mexico, celebrated from October 31 to November 2.

Germany was officially re-unified on October 3, 1990.

Part of the Bayeux Tapestry showing the Battle of Hastings, which took place on October 14, 1066.

Image showing the death of Horatio Nelson at the Battle of Trafalgar on October 21, 1805.

All content from Kiddle encyclopedia articles (including the article images and facts) can be freely used under Attribution-ShareAlike license, unless stated otherwise. Cite this article:
October Facts for Kids. Kiddle Encyclopedia.