The Zodiac is the twelve constellations in the form of animals or humans. 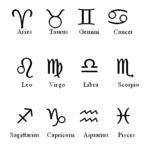 The modern astrological signs are the simplified pictures of the signs used in the Hellenistic times. These are the twelve animals the signs represent:

The Zodiacs were determined whether your birthday falls on.

In the Chinese Zodiac, years match twelve animals in turn.

All content from Kiddle encyclopedia articles (including the article images and facts) can be freely used under Attribution-ShareAlike license, unless stated otherwise. Cite this article:
Zodiac Facts for Kids. Kiddle Encyclopedia.