The Sun appears to move with respect to the fixed stars, as seen from the orbiting Earth

The ecliptic is the apparent path that the Sun traces out in the sky during the year. As it appears to move in the sky in relation to the stars, the apparent path aligns with the planets throughout the course of the year. It is the intersection of a spherical surface, the celestial sphere, with the ecliptic plane, which is the geometric plane containing the mean orbit of the Earth around the Sun.

The name ecliptic is derived from being the place where eclipses occur.

The motions as described above are simplifications. Due to the movement of Earth around the Earth–Moon center of mass, the apparent path of the Sun wobbles slightly, with a period of about one month. Due to further perturbations by the other planets of the Solar System, the Earth–Moon barycenter wobbles slightly around a mean position in a complex fashion. The ecliptic is actually the apparent path of the Sun throughout the course of a year.

Because Earth takes one year to orbit the Sun, the apparent position of the Sun takes one year to make a complete circuit of the ecliptic. With slightly more than 365 days in one year, the Sun moves a little less than 1° eastward every day. This small difference in the Sun's position against the stars causes any particular spot on Earth's surface to catch up with (and stand directly north or south of) the Sun about four minutes later each day than it would if Earth would not orbit; a day on Earth is therefore 24 hours long rather than the approximately 23-hour 56-minute sidereal day. Again, this is a simplification, based on a hypothetical Earth that orbits at uniform speed around the Sun. The actual speed with which Earth orbits the Sun varies slightly during the year, so the speed with which the Sun seems to move along the ecliptic also varies. For example, the Sun is north of the celestial equator for about 185 days of each year, and south of it for about 180 days. The variation of orbital speed accounts for part of the equation of time.

Relationship to the celestial equator 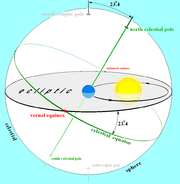 The orientation of Earth's axis and equator are not fixed in space, but rotate about the poles of the ecliptic with a period of about 26,000 years, a process known as lunisolar precession, as it is due mostly to the gravitational effect of the Moon and Sun on Earth's equatorial bulge. Likewise, the ecliptic itself is not fixed. The gravitational perturbations of the other bodies of the Solar System cause a much smaller motion of the plane of Earth's orbit, and hence of the ecliptic, known as planetary precession. The combined action of these two motions is called general precession, and changes the position of the equinoxes by about 50 arc seconds (about 0.014°) per year.

Plane of the Solar System

All content from Kiddle encyclopedia articles (including the article images and facts) can be freely used under Attribution-ShareAlike license, unless stated otherwise. Cite this article:
Ecliptic Facts for Kids. Kiddle Encyclopedia.