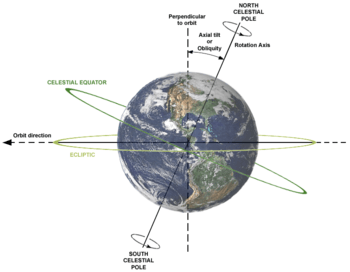 The celestial equator is inclined by 23.5° to the ecliptic plane. The image shows the relations between Earth's axial tilt (or obliquity), rotation axis and plane of orbit.

The observer always sees the ends of the semicircle disappear over the horizon exactly due east and due west, regardless of the observer's position on Earth.

All content from Kiddle encyclopedia articles (including the article images and facts) can be freely used under Attribution-ShareAlike license, unless stated otherwise. Cite this article:
Celestial equator Facts for Kids. Kiddle Encyclopedia.