The Earth rotating within a relatively small-diameter Earth-centered celestial sphere. Depicted here are stars (white), the ecliptic (red), and lines of right ascension and declination (green) of the equatorial coordinate system 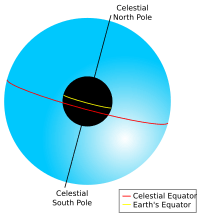 In astronomy and navigation, the celestial sphere is an imaginary sphere (ball) of a very large unspecified size. The earth and the sphere have the same centre: they are concentric. They also rotate upon the same axis. All objects in the sky can be thought of as projected (drawn, written) upon the celestial sphere. This imaginary sphere is a very practical tool for positional astronomy.

The Earth rotates from west to east around its axis in slightly less than 24 hours. The celestial sphere and all objects on it appear to rotate from east to west around the celestial poles in the same time. This is the diurnal motion (daily motion). This is why stars will rise in the east and set in the west, (unless a star is circumpolar). On the next night a particular star will rise again, but with our normal clocks running a 24-hour 0-minute cycle, it will do so slightly less than 4 minutes earlier. By the following night the difference will be 8 minutes, and so forth with every following night (or day).

The reason for this is that the Sun does not stand still on the celestial sphere, and the stars do (except for a tiny proper motion). The sun moves about 1° per day eastwards over a great circle known as the ecliptic (which is 360° or a full circle in one year, the annual motion of the Sun). As an angle of 1° corresponds to 4 minutes in time (360° = 24 hours), we need therefore four extra minutes of diurnal motion to see the Sun back on the same meridian again, making the duration of one rotation just 24 hours exactly (on the average, ignoring small seasonal variations, see equation of time) 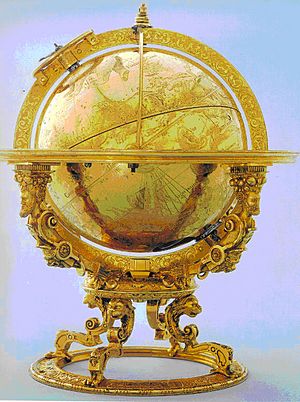 All content from Kiddle encyclopedia articles (including the article images and facts) can be freely used under Attribution-ShareAlike license, unless stated otherwise. Cite this article:
Celestial sphere Facts for Kids. Kiddle Encyclopedia.