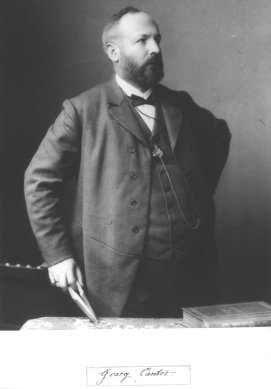 Cantor's original definition of a set

A set is an idea from mathematics. A set has members (also called elements). A set is defined by its members, so any two sets with the same members are the same (e.g., if set

have the same members, then 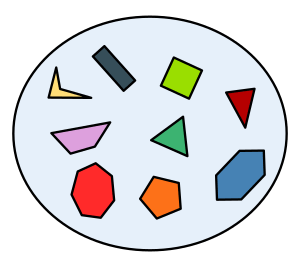 Example of a set of polygons

A set cannot have the same member more than once. Membership is the only thing that matters. For example, there is no order or other difference among the members. Anything can be a member of a set, including sets themselves (though if a set is a member of itself, paradoxes such as Russell's paradox can happen).

Imagine the set is a bag.

Various things can be put into a bag. Later on, a good question would be if a certain thing is in the bag. Mathematicians call this element of. Something is an element of a set, if that thing can be found in the respective bag. The symbol used for this is

is an element of

Unlike a bag, a set can contain at most one item of a given type. So for a set of fruits, it would make no difference if there is one orange, or if there are 10 oranges.

Like a bag, a set can also be empty. The empty set is like an empty bag: it has nothing in it. The "empty set" is also called the null set and is represented by the symbol

In other words, a universe is a collection of all the elements one wishes to consider in a given problem. The universe is usually named

Two sets can be compared. This is like looking into two different bags. If they contain the same things, they are equal. No matter, in which order these things are.

, the sets are the same.

have the same cardinality. E.g, we could pair apple with sun, and orange with moon. The order does not matter. It is possible to pair all the elements, and none is left out. But the set

. The natural numbers are nicknamed "the counting numbers", since they are what we usually use to count things with.

An uncountable set is an infinite set that is impossible to count. If we try to count the elements, we will always skip some. It does not matter what step we take. The set of real numbers is an uncountable set. There are many other uncountable sets, even such a small interval like 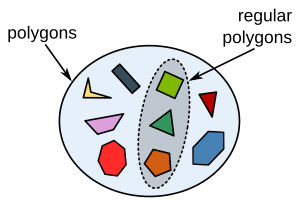 A subset of regular polygons

If you look at the set

, you can see that all elements in the first set are also in the second set.
We say:

is a subset of

In general, when all elements of set

are also elements of set 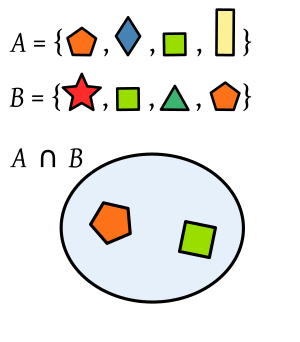 Intersection of two sets of polygons

at the same time. 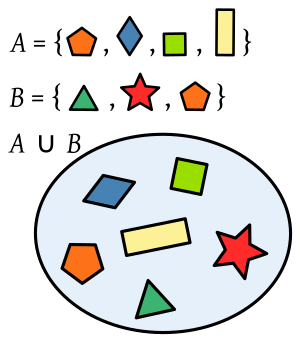 Union of two sets of polygons

. This "or" is the inclusive disjunction, so the union also contains the elements, that are in set

. By the way, this means, that the intersection is a subset of the union:

is the set of all things you speak about.
Example: When

is the set of all cars, and

is the set of all cheap cars,
then

C is the set of all expensive cars. 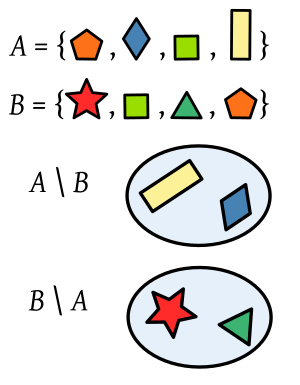 Differences of two sets of polygons

It is also called the relative complement of

). The things that are seen as elements of sets are usually written with lowercase Roman letters.

Another way, called the set-builder notation, is by a statement of what is true of the members of the set, like this:

In spoken English, this reads: "the set of all x such that x is a natural number and x is less than four". The symbol [ipe "|" means "such that" or "so that".

The empty set is written in a special way:

When object a is the member of set

it is written as:

In spoken English, this reads: "a is a member of

To illustrate operations on sets mathematicians use Venn diagrams. Venn diagrams use circles to show individual sets. The universe is depicted with a rectangle. Results of operations are shown as colored areas. In the illustration of the intersection operation the left circle shows set

Some sets are very important to mathematics. They are used very often. One of these is the empty set. Many of these special sets are written using blackboard bold typeface, and these include:

The mathematician Bertrand Russell found that there are problems with the informal definition of sets. He stated this in a paradox called Russell's paradox. An easier to understand version, closer to real life, is called the Barber paradox.