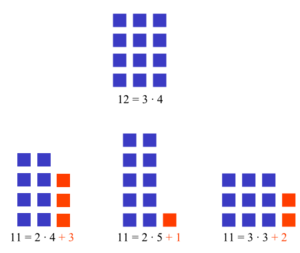 Here is another way to think of prime numbers. The number 12 is not prime, because a rectangle can be made, with sides of lengths 4 and 3. This rectangle has an area of 12, because all 12 blocks are used. This cannot be done with 11. No matter how the rectangle is arranged, there will always be blocks left over. 11 must therefore be a prime number

The way that the prime numbers occur is a difficult problem for mathematicians. When a number is larger, it is more difficult to know if it is a prime number. One of the answers is the Prime number theorem. One of the unsolved problems is Goldbach's conjecture.

How to find small prime numbers

There is a simple method to find a list of prime numbers. Eratosthenes created it. It has the name Sieve of Eratosthenes. It catches numbers that are not prime (like a sieve) and lets the prime numbers pass through.

The method is always the same:

What prime numbers are used for

Prime numbers are very important in mathematics & computer science. Some real-world uses are given below. Very long prime numbers are hard to solve. It is difficult to find their prime factors, so most of the time, numbers that are probably prime are used for encryption and secret codes.

All content from Kiddle encyclopedia articles (including the article images and facts) can be freely used under Attribution-ShareAlike license, unless stated otherwise. Cite this article:
Prime number Facts for Kids. Kiddle Encyclopedia.