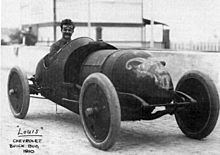 Chevrolet, also known as Chevy, and formally the Chevrolet Division of the General Motors Company, is a car company owned by General Motors. Chevrolet is known for producing popular, affordable cars. Chevrolet produces the Corvette, one of the most famous sports cars in the world.

Chevrolet was created in 1911 by Louis Chevrolet. Louis was a racing car driver. Chevrolet started using its "bow-tie" logo in 1913. It could have come from a wallpaper Chevrolet saw in a hotel. It could also be a version of the cross on the Swiss flag, due to Chevrolet having been born in Switzerland.

In 1917, Chevrolet combined with General Motors. In 2002, GM acquired the recently bankrupt Daewoo Motors company of South Korea, and in 2011, the brand was folded into Chevrolet making the marque global except for Australasia.

Some of these vehicles also come, or used to come in, hybrid-electric versions.

All content from Kiddle encyclopedia articles (including the article images and facts) can be freely used under Attribution-ShareAlike license, unless stated otherwise. Cite this article:
Chevrolet Facts for Kids. Kiddle Encyclopedia.